Rhinoceros Horn "Lily" Cup and Carved Wood Stand, China, 17th/18th century, of tapered ovoid form, depicting a deeply hollowed out lily, the exterior sides carved with an unfurling lily and buds with the leaves of the lily forming a long, reticulated handle intertwined with the gnarled, leafy branches of the nandina tree, the leaves of the tree extending on to the lip of the interior, the interior carved with well-articulated, large lily petals with a low-relief stamen rising from the center, the cup rests, and is attached by a small peg, to the custom wood stand carved in high relief depicting an open lotus blossom surrounded by lotus pods and leaves, the horn of even, reddish-brown color deepening to a darker brown at the center, cup, ht. 5 1/2; with stand 8 1/4 in.

Note: The relationship of the lily and the lotus, as depicted in this cup and stand, is auspicious as well as relating to a visual pun. The lily reading "baihe" meaning one hundred years of harmonious union makes the lily a symbol for weddings. The lotus reading "he", harmony, suggests a pun for "harmonious union" as well. The addition of the nandina leaves, which suggest good fortune and many children, make it likely that this cup was made for a wedding ceremony.

Provenance: According to family history, acquired from Bluett & Sons, London in the 19th century by the Lauder family, to Mary Lauder Ross and John Alexander Ross, Scotland by 1910, to their daughter, sent to the United States in the 1960s, then by descent. The cup descended in the family of John Alexander Ross, the manager of the Crombie Mill, Aberdeen, Scotland, makers of luxury clothing, long favored by royals and international statesmen. It was once part of the contents of Netherton Lodge, the Ross Arts & Crafts manor house decorated with William Morris furnishings and Asian objects acquired from Bluett & Sons, London.

in good condition, please note the small peg attaching the cup to the stand 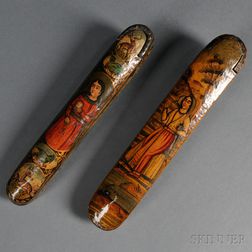 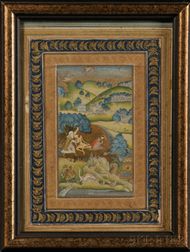 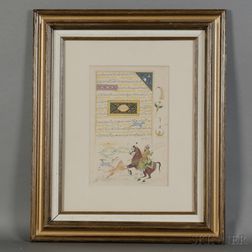 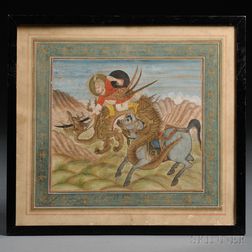 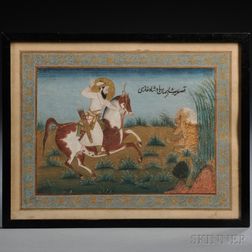 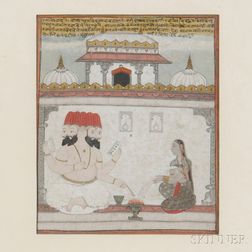 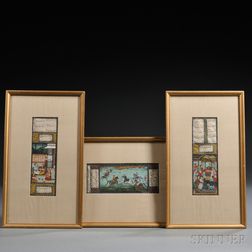 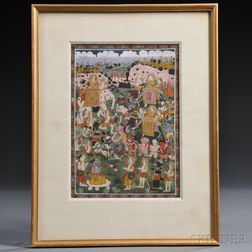 Painting of a Scene from The Ramayana