N.B. The present, enigmatic work dates to Picabia's time in the south of France, which was an experimental and highly innovative period spanning nearly two decades.

By 1925, Picabia felt that the Dada movement no longer packed the anti-establishment punch that it once had, and he left Paris for Mougins, near Cannes, where he would remain until 1945. Picabia found a renewed vigor on the Côte d'Azur. In a letter dated February 27, 1926 to the French fashion designer Jacques Doucet, he notes, "This country which seems…to make some lazy, stimulates me to work…I have more and more pleasure in the resumption of painting."(1)

Picabia experimented with several bodies of work in Mougins through 1927--including Espagnoles (depicting archetypal Spanish women),Les monstres (depicting grotesque figures in heavy black outlines) and mixed-media collages--before creating one of his most important series known as Les Transparences (2)Les Transparences, which he developed through the early 1930s, comprised of superimposed classical, Romanesque and Renaissance silhouettes over figures and landscapes, and the effect was described by Marcel Duchamp as an impression of "the third dimension without the aid of perspective." (3)

In the mid- to late 1930s, Picabia often referenced and juxtaposed the motifs and methods developed in these earlier bodies of work, some of which he overpainted. (4) A notable example of a reworked amalgamation is Le Beau Charcutier [The Handsome Pork-Butcher] in the Tate Modern permanent collection. The work was first conceived ca. 1924-6 as a mixed-media collage painting of a man, thought by some to be of the French politician Raymond Poincaré, and re-conceived ca. 1929-35 with the profile of a glamorous woman superimposed over the male portrait. (5)

While scholarship on the present work is in its nascent stage, infrared reflectography (IRR) reveals the existence of a previous composition depicting a bust in profile of at least one figure (facing right),superimposed over a repetitive solar or floral motif in the background, with a signature reading "Francis Picabia" at lower center.

The work is registered as no. 3299 with the Comité Picabia, and will be included in their forthcoming Catalogue Raisonné de l'Oeuvre de Francis Picabia. A photo-certificate from the Comité Picabia accompanies the lot, and we wish to thank them for their kind assistance. A copy of the IRR report, conducted by the Worcester Art Museum Conservation Department, Worcester, Massachusetts, with recommendations for further imaging and analysis, also accompanies the lot.

The conservation report by Oliver Brothers, Boston, October 1963, affixed to the reverse, states: "TREATMENT OF PICABIA PAINTING OF ST. TROPEZ/ The painting was cleaned of grime and yellowed varnish. The canvas was flattened and mounted on a muslin covered piece of aluminum with a wax-resin adhesive. Small amount of retouching was done in an alkyd paint medium. The painting was brush coated and then sprayed with N butyl methacrylate and poly vinyl acetate. The surface was wiped with an anti-static solution to repel dust and dirt."

Observable at present: Wide aperture drying cracks throughout all four quadrants. Retouch to drying cracks in all four quadrants, with the largest single area to u.l. quadrant spanning approximately 3 1/2 x 3/8 in. (located to the lower left of the sail). Paint visible through wide aperture cracks is high gloss in raking light, in contrast to the matte blue paint over it. Minor surface grime. A label from Doll and Richards, Inc., Boston, with No. C55261 is affixed to the frame reverse. According to the Doll and Richards Gallery records at the Archives of American Art, Smithsonian Institution, Box 63, Folder 18, the work order form with this number regards a framing job for the current frame, dated January 15, 1964.

A copy of the IRR report by the Worcester Art Museum Conservation Department is available upon request. 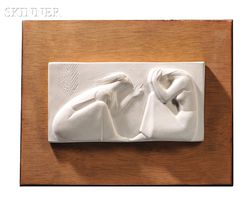 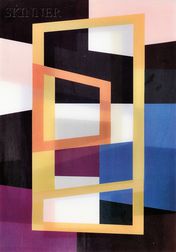 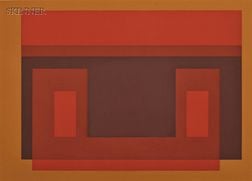 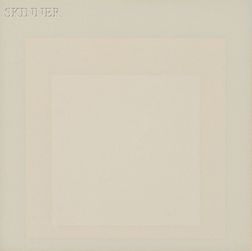 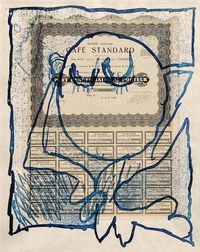 Pierre Alechinsky (Belgian, b. 1927) KRACH / A Portfolio of Five Works 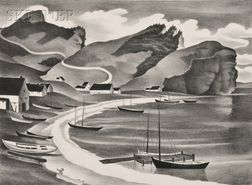 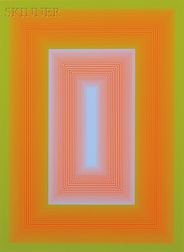 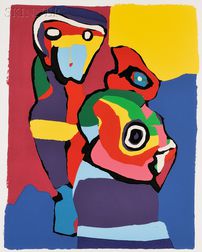