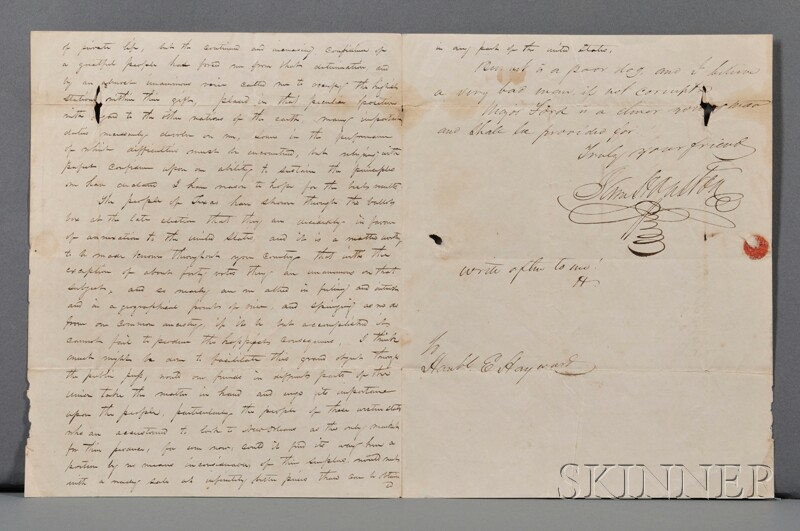 Houston, Samuel (1793-1863) Autograph and Secretarial Letter Signed, 1 November 1836.
Paper bifolium inscribed on two and a half pages. To Elijah Hayward (1786-1864) describing the current situation in Texas, and the recent elections, (Houston was elected President) and expressing Texas's interest in joining the United States. The first two pages of the letter in a secretarial hand, with the last two sentences, beginning, "Burnet is a poor dog..." in Houston's hand, signed by Houston. Old folds, small stains, two holes, with the address and seal, and a New Orleans postmark on the verso, 9 3/4 x 7 3/4 in. folded.
I have just received your letter of the 6th August, and it gives me much pleasure to know that although far removed from the most of my old friends in the United States, they still evince some interest in my own prosperity and an anxious solicitude for the success of the great cause of political and religious liberty in Texas.

The eyes of the world are upon us, and the events of the last twelve months have excited the generous sympathies of many patriots' hearts. We are an infant Republic just emerging from the political season, dark and gloomy have been our prospects, difficulties and dangers have attended on every side, but that gloom has in a great measure been dissipated, these difficulties and dangers have been gloriously surmounted, and the bright star of Texian [sic] independence is now moving rapidly onward to the mountain of its glory. It is indeed enough for one man to have been the leader of that noble band who achieved the ever memorable victory of San Jacinto [April 21, 1836], and under the influence of that feeling, I had determined to hold no office under the government other than that which I then held, and to retire from that as soon as the circumstances of my country would permit, to the powerful shade of private life, but the continued and increasing confidence of a grateful people has forced me from that determination, and by an almost unanimous voice called me to occupy the highest station within their gift. Placed in that peculiar position with regard to the other nations of the earth, many important duties must only devolve on me, some in the performance of which difficulties must be encountered, but relying with perfect confidence upon our ability to sustain the principles we have ordained I have reason to hope for the best results.

The people of Texas have shown through the ballot box at the late election that they are decidedly in favor of annexation to the United States, and it is a matter worthy to be made known throughout your country that with the exception of about forty votes, they are unanimous on that subject, and so nearly are as allied in feeling and interest and in a geographical point of view, and springing as we do from our common ancestry, it is all but accomplished, it cannot fail to produce the happiest consequences. I think much might be done to facilitate this grand object through the public press, should our friends in different parts of the Union take the matter in hand and urge its importance upon the people, particularly the people of these western states who are accustomed to look to New Orleans as the only market for their products, for even now, could it find its way here a portion by no means inconsiderable, of this surplus, would meet with a needy sale at infinitely better prices than can be obtained in any part of the United States.

Write after to me!