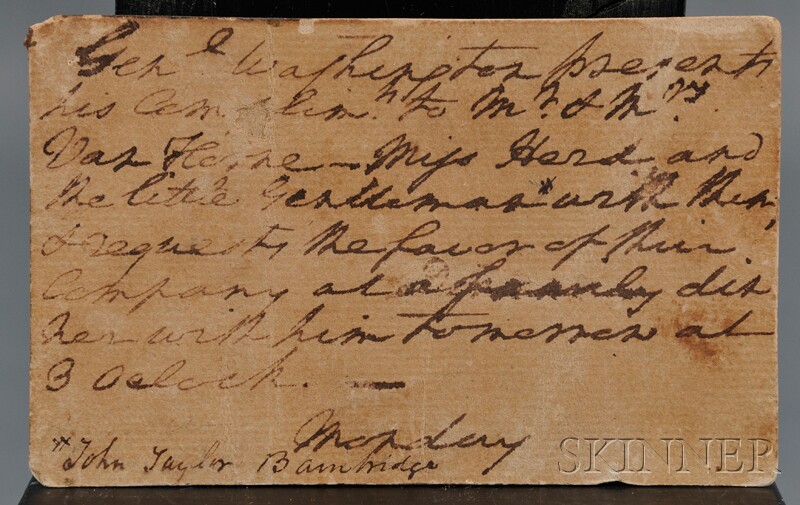 Washington, George (1732-1799) Signed Invitation, c. 1783.
Single-sided card. To John Van Horne (1743-1820), inviting Van Horne, his wife, sister-in-law, and a child to a family dinner; evenly toned, with some ink smudges, 2 3/4 x 4 5/8 in.
"Gen[eral] Washington presents his complim[ents] to Mr. & Mrs. Van Horne-- Miss Herd [Heard] and the little Gentleman [*] with them & requests the favor of their company at a family dinner with him tomorrow at 3 o'clock.-Monday". Asterisk and notation added in another hand [*John Taylor Bainbridge]
John Van Horne inherited thousands of acres of land in Rocky Hill, New Jersey, Somerset County. He married General Nathaniel Heard's daughter on January 8, 1776 in New York. General Heard served with distinction in many important battles under General Washington. Heard had three sons and four daughters. The "Miss He[a]rd" referred to by Washington in the invitation is therefore most likely Mrs. Van Horne's sister.
The "little gentleman," John Taylor Bainbridge (b. circa 1778) was the youngest son of Absalom Bainbridge (1741-1807) and Mary Taylor Bainbridge (b. circa 1744). Absalom was a military surgeon for the British army during the Revolution and was convicted of high treason. He fled the U.S. for England in 1783. His wife stayed behind because she was ill. He did eventually return, dying in the States in 1807. J.T.'s oldest brother, William Bainbridge (1774-1833) fought famously in the navy in the War of 1812.
George Washington sat for the teenage artist William Dunlap in 1783 at his headquarters in Somerset County, New Jersey. Dunlap's pastel portrait of the President is amateurish, but still extant, hanging at the Office of the United States Senate Curator. The portrait was owned by the Van Horne family for more than 150 years. The Van Hornes introduced Dunlap, who was staying at Rocky Hill, their home in Somerset New Jersey, to General Washington. At that time Washington's headquarters was near the Van Horne home, and he was known to have socialized with them during this period. The Dunlap portrait itself is proof of that, and also helps to date this invitation. J.T. Bainbridge would have been five at about this time, and recently abandoned by his Tory father.
Estimate $8,000-12,000