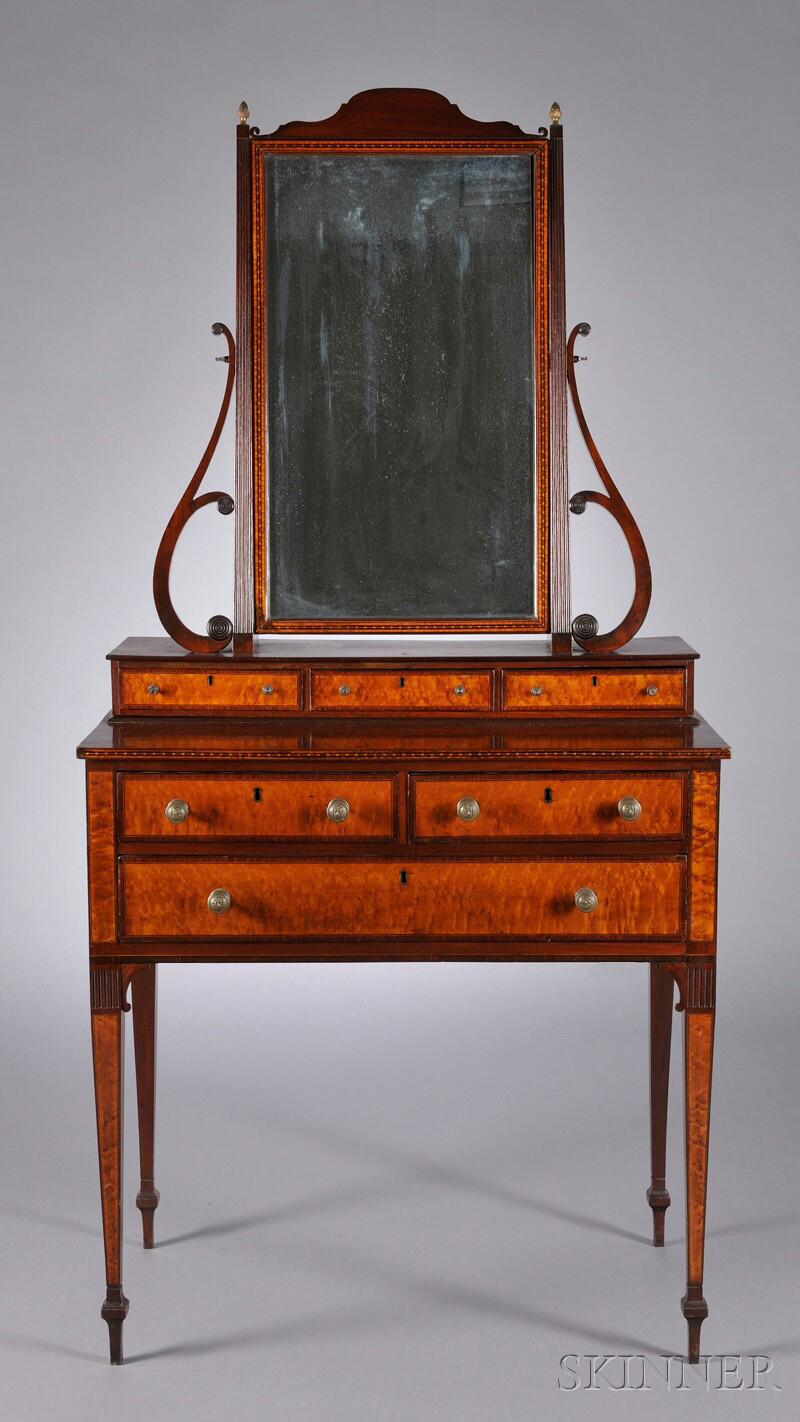 The English immigrants John Seymour and his son Thomas were the leading innovators in Boston for introduction of new stylish forms to Boston beginning with their arrival in 1793. Their innovations included the tambour-door secretary, probably sofa tables, and dressing chests with mirrors like the present example. Based on French prototypes, dressing chests were first made in the town beginning about the time Thomas Seymour opened his large Boston Furniture Warehouse in 1804. Never satisfied with making one version of any form, Thomas Seymour constantly experimented with both basic form and with all the variations of surface ornament so that rarely are two pieces identical unless made originally as a set.

Of the many variations of dressing tables with mirrors by the Seymours, none exceeds this one in its elegance and grace, its brilliance of inlay, its condensation and abstraction into a pure recognizably American form. One other virtually identical example is known. In the opinion of the author, they are two of the great masterpieces made in Federal era America. Their perfection of proportion is unsurpassed. Their design takes two large rectangular masses - the mirror frame and lower case - and subtly unites them with elegant scrolling mirror brackets, simply shaped crest rails, knee brackets and molded square feet. They represent the best craftsmanship of the maturing period of Thomas Seymour's career and mark him as an ambitious and talented craftsman. Though John Seymour probably collaborated, he was probably seventy or more when this was made and gradually retired from active work in the next few years.


In the 1790s, the Seymours were copying English and French practices by employing the strong color contrast of mahogany combined with light-wood veneers, usually satinwood. One example labeled by them dates from about 1794-1800 employs all satinwood veneers for both desk interior and exterior surfaces. By the time of this dressing chest, they had changed to using native light-wood veneers, bird's-eye and curly maple. Curly figured maple is used here as the principal veneer in the frame of the mirror. It is embellished further by having a light-wood string of "dart" pattern let into a central stripe of sand-scorched veneer for dramatic contrast. A similar dart pattern string is let into edges of the top. They frequently used this pattern, which was probably imported as a stock item from England.


Veneer work is precise throughout and perfectly executed. They used their favorite device by framing the bird's-eye maple panels on drawer fronts with dark wood cross crossbanding, then framing these central panels with runs of blackwood-whitewood stringing. The white string is always adjacent to the dark wood crossbanding, the whitewood string is always next to the lightwood veneer panel. On the lower drawer here, the Seymours used crossbanding surrounds of the Australian wood "she-oak", also called Botany Bay oak in the period though it is in an entirely different family (Casuarina) of plants than oak (Quercus). On the related dressing chest, crossbandings are mahogany, a minor difference. Both upper and lower drawers here have precise, thin cockbead moldings applied to all edges. The simply shaped mahogany knee brackets are inlaid with curving panels of mahogany veneer. Both brackets are missing their upper end scrolls which would have mirrored the surviving lower scroll ends. On the related dressing chest, these inlaid curving veneer panels are ebonized to a black color.


The delicate legs are tapered on all four sides, a more costly practice than shaving two sides as is often found on other craftsmen's work, but more elegant and used invariably by the Seymours. The shaped, squared feet were also costly to make than turned or simple tapered "spade" feet, but they are found frequently on Seymour work in this period. Thomas Sheraton's 1803 Cabinet Dictionary includes an entire engraved plate showing various related "therm" or "term" feet, the period English name for this type of tapering foot. Thomas Seymour is known to have copied and adapted various designs from this source and probably also employed and altered one of them from the same source. The legs also employ a favorite Seymour visual device from this period - the use of a small rectangular panel of reeding at the top beside the knee brackets.


Secondary wood choice and construction details mirror typical Seymour shop practices. For example, ash is used selectively as a secondary wood following English practice, here for upper drawer linings and lower case drawer blades. Drawer construction and glue blocking matches their template of typical practices. Mirror standard supports are mortised into the top of the small drawer box, but not entirely through the 5/8 in. thin top. The standards are supplemented at the rear with beautifully shaped mahogany brackets. Ring-turned circular wood "bosses" of graduated size are applied to the terminations of the scrolling brackets, a favorite Seymour feature.


The pine bag slide frame and runner strips appear to be early replacements though they have very dark oxidation. The frame is of pine, not the typical mahogany, the joinery is not particularly refined, the front rail has square ends that just "die" with no visual termination. The Seymours always integrated such elements into the total design. In addition, the pine sliding rails are merely mounted with modern machine made screws to the undersides of the case back and lower drawer rail, not joined in in any way as the Seymours' normally did. The textile bag is much more modern and has faded since installation.


Note: A complete annotated copy of Mr. Mussey's write-up is available for review upon request to the American Furniture and Decorative Arts department. We are thankful to Mr. Mussey for his assistance in cataloguing this lotthis lot.
Estimate $150,000-200,000

losses and restorations to veneers of lower left corner of mirror frame,
minor losses of stringing,
losses of all ankle-cuff inlay moldings, probably a simple bead, possibly ebonized originally,
other minor repairs in scattered locations, but no major losses,
bag frame and runners probably added early in its history,
shrinkage cracks to side of case,
mirror glass replaced. 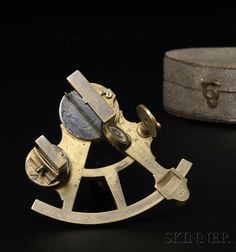 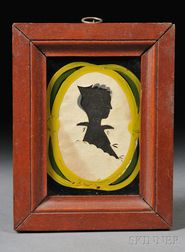 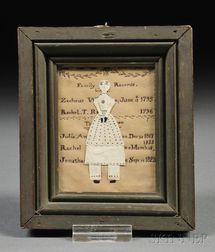 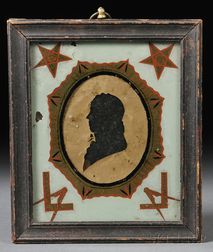 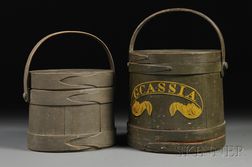 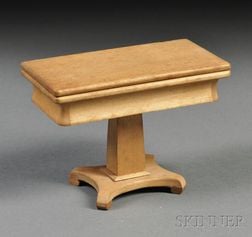 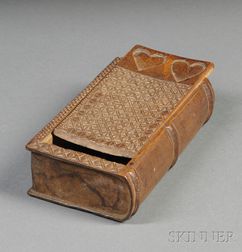