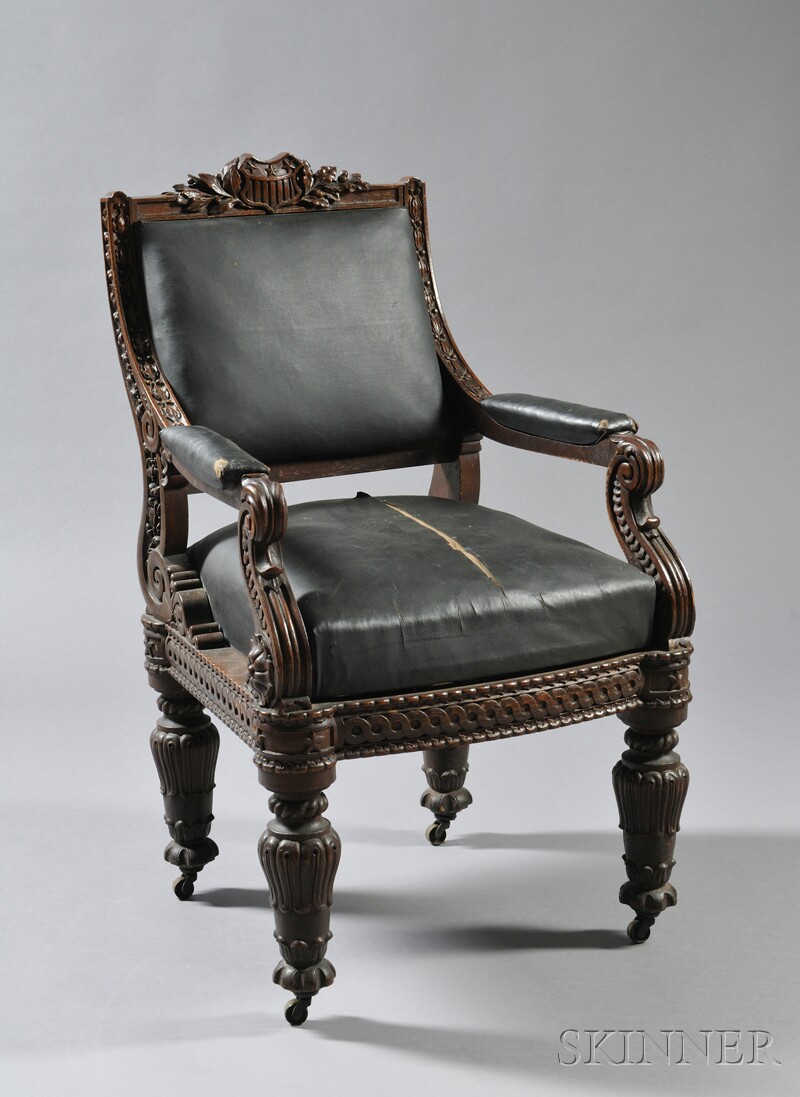 Note: Designed by Architect of the Capitol Thomas Ustick Walter and built by Bembe & Kimbel of New York, this chair was part of a group designed to furnish the newly constructed chamber of the House of Representatives. In a wave of construction and renovation that included the addition of the current, iconic dome, Walter designed expansions that would house chambers still used by the Senate and the House of Representatives. Following a long line of architects for whom furniture design was an extension of architectural execution, Thomas Ustick Walter designed pieces to be used by the members of the House of Representatives. These desks and chairs were in use from the opening of the chamber in 1857 until 1873, when the chamber was refurbished.

Though the shape and story of these chairs are well known, relatively few survive. Massive in form and symbolism, this example illustrates the sense of gravitas that was deliberately woven through the physical surroundings of the nation's legislative process. In designing a new capitol building and capital city, William Thornton and Charles L'Enfant drew upon historical precedents of form and function long associated with Greece and Rome, cultures whose political structures inspired the architects of the young American government. Steeped in similar traditions, Thomas Ustick Walter made his name as a skilled designer of Greek Revival buildings in his native Philadelphia. It is no surprise, then, that he was tapped to serve as Architect of the Capitol and tasked with expanding the legislative chambers to accommodate representatives of newly formed Western states.

New York furniture makers Bembe & Kimbel were one of two firms contracted to produce the chairs needed for the new chamber, and they left their stenciled mark on the inside rear seat rail of this example. By the mid-nineteenth century, New York had become a center for émigré artisans, skilled craftsmen who arrived from places like France and Germany. Anthony Kimbel, for example, trained in both countries before arriving in New York and opening his own shop with the financial backing of Anton Bembe. Located on Walker Street and Broadway in Manhattan during the late 1850s and early 1860s, the firm is best remembered for their Congressional commission.

Constructed of heavy, sturdy oak, the chair is ornamented with expert carvings. Along the crest, oak leaves represent strength and endurance and surround a stars-and-stripes shield. Assorted foliate and architectural carvings on the arms and legs align the chair perfectly with the prevailing mid-nineteenth century penchant for three-dimensional ornament. Indeed, the chair was considered fashionable enough in its time that one example was featured in the studio of famed portrait photographer Mathew Brady, who acquired it as part of the dispersion of those chairs left behind when eleven states seceded and their Congressional representatives left Washington. In Brady's well-loved portraits of President Abraham Lincoln and his son Tad, the President reclines in the chair, leaning his elbow on its heavily carved arm as he famously reads to his young son.

This chair survives as a rare example of a fine form. In its design and in its function, this Congressional seat represents a unique intersection between the history of American decorative arts and the legacy of American government.
Estimate $10,000-15,000

some wear to surface.