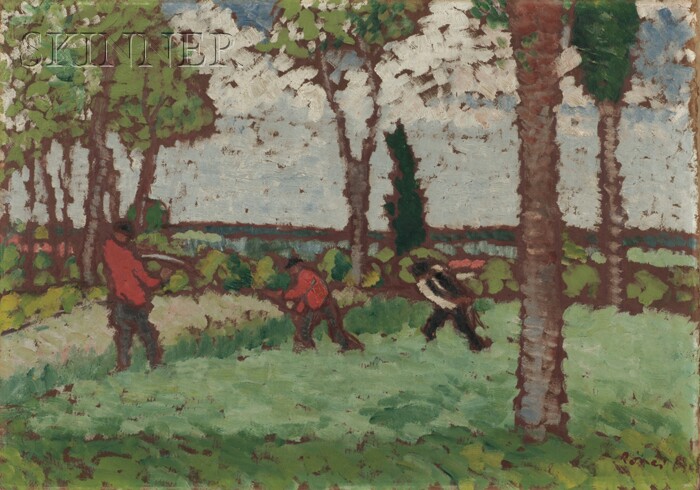 Provenance: Purchased by Miklos Sperling (Hungarian/American,1899-1971), Indianapolis, Indiana, probably while traveling in Hungary; then by descent within the family to the current owner.

N.B. József Rippl-Rónai was one of the leading artists of his generation in Hungary. Born in Kaposvar, Rippl-Rónai began the formal study of art in Munich in 1884. However, he was drawn to the art climate of Paris, moving there in 1887 and working in the studio of Hungarian ex patriot painter Mihály Munkácsy (1844-1900). The young painter enrolled at the Académie Julian in 1890, studying beside Vuilllard, Bonnard, and Maillol, as well as James Pitcairn-Knowles (Scottish, b. 1864), who would become a lifelong friend and artistic collaborator. During this time Rippl-Rónai became associated with the Nabis, but also absorbed the poetic aesthetic of James Abbott McNeill Whistler.

When Rippl-Rónai returned to Budapest in 1901, the city was emerging as a cosmopolitan center, and Hungary itself was focused on the cultivation of a national cultural identity. Rippl-Rónai developed a personal approach that brought the avant-garde styles of Paris to bear on subjects of Hungarian domestic life. His work was not limited solely to painting; he created prints, ceramics, and other decorative arts, and also art glass in conjunction with Pitcairn-Knowles. Later in life he would work extensively in pastel.

The painting at hand most likely dates between 1908 and 1914, a period in Rippl-Rónai's work that is described as the kukoricas, which translates to "maize" or "rice" pictures. The description refers to the application of paint in bold daubs of pure color built up over the surface of the canvas. Rippl-Rónai tended to use very intense color, in the manner of the Fauves, but in this example the palette is more naturalistic. The scene of agricultural workers was one of several outdoor subjects favored by Rippl-Rónai at the time.

We would like to thank Dr. Mariann Gergely, Chief Curator, Magyar Nemzeti Galeria (Hungarian National Gallery), Budapest, for her kind assistance authenticating this painting, and Dr. Paul Stirton for his helpful comments and advice. A letter of authentication from Dr. Gergely accompanies the lot.

The board is gently curved. The surface grime is minor but uneven. There are no other issues to report.