Elihu Vedder (American, 1836-1923) Study for The Abundance of the Days of the Week, Sunday, A Ceiling Panel from the Residence of Co... 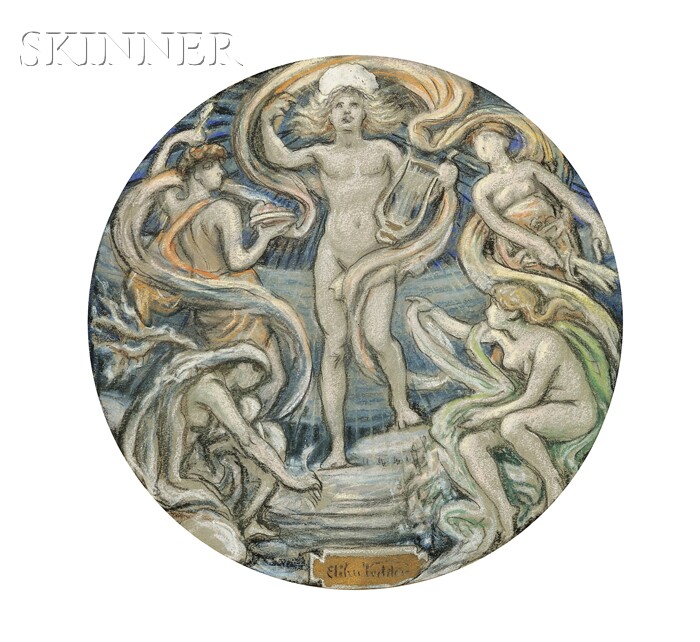 Study for The Abundance of the Days of the Week, Sunday, A Ceiling Panel from the Residence of Collis P. Huntington, New York, c. 1893
Inscribed "Elihu Vedder" within the composition.
Pastel on paper, circular format, 8 1/4 x 8 1/8 in., framed.
Condition: Rippling, paper tape residue in corners, affixed to backing mat in three corners.

N.B. Through architect George Post, Elihu Vedder received a commission to create ceiling panels for the home of Collis P. Huntington in New York in 1893. Vedder was particularly pleased with the commission, because it offered him a reason to decline a commission for ceiling paintings at the World's Columbian Exposition, which he felt posed particular technical difficulty and which would require his staying in Chicago to create on site. While Vedder was reluctant to disappoint architect Charles McKim, who had brought him to Chicago, Vedder considered the Huntington project to be the best he had ever received. The ceiling for the Huntington residence could be completed on canvas in Rome and then brought to New York for installation. (1) The subject for the Huntington commission was "The Abundance of the Days of the Week," with each day presented using a corresponding god or goddess and planet. The drawing at hand shows Apollo who represented Sunday, surrounded by the Four Seasons. (2) The finished painting, which formed the central panel of the ceiling, is now in the collection of the Yale University Art Gallery, as are a number of Vedder's studies for the commission.

1. Elihu Vedder, The Digressions of V., written for his own fun and that of his friends by Elihu Vedder (Boston and New York: Houghton Mifflin Company, 1910), p. 490.
2. Joshua Charles Taylor, Jane Dillenberger, Richard Murray, Perceptions and Evocations: The Art of Elihu Vedder (Washington, D.C.: Published for the National Collection of Fine Arts by the Smithsonian Institution Press, 1979), p. 207.
Estimate $2,000-3,000