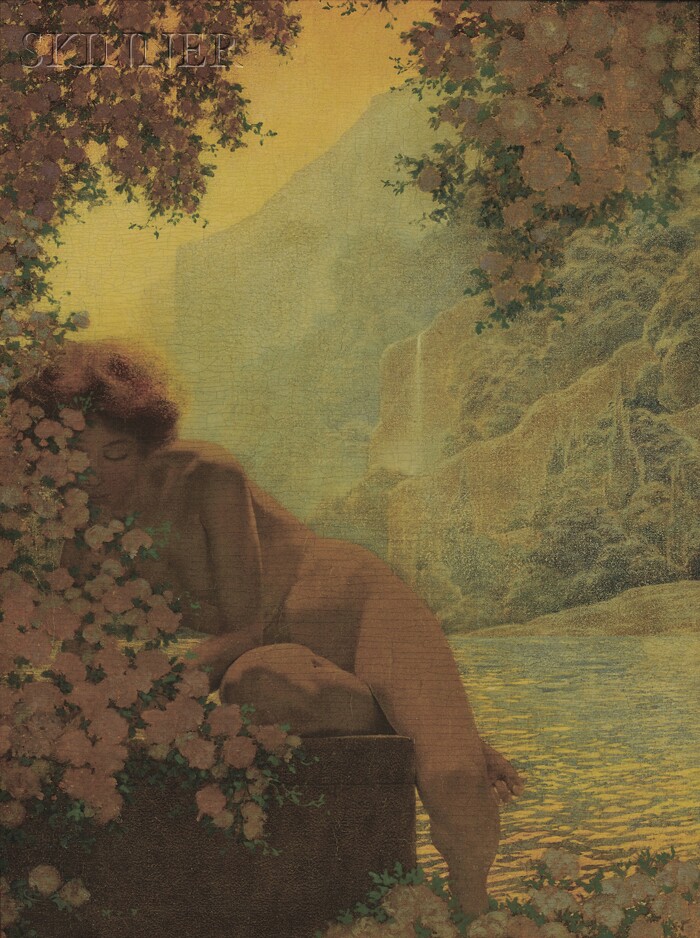 N.B. The lot is accompanied by the original sales receipt made out to Mr. Arthur Goadby from The New York Co-operative Society dated May 26, 1909, and by a handwritten letter from Maxfield Parrish to Arthur Goadby, dated November 10th, 1915. Parrish's letter responds to a note of appreciation sent by Mr. Goadby to the artist. In his reply, Parrish discusses the title, "Summer," and relates that, ..."it was begun as a painting of 'Pandora' reclining against the box and idly fingering the knot. Afterwards it was cut down and changed to its present form. May be the dealer gave it the name of 'Summer.' I dare say it was merely a guess, and any name you may see fit to give it, I am sure will answer just as well. The landscape was purely imaginative, and the figure partly painted from life. It was painted here in Cornish, and represents no particularly country." Further jottings from Mr. Goadby include a photograph of The Vale of Tempe in Thessaly, and his notes drawing parallels between that landscape and his Parrish painting. Goadby writes, "it is remarkable that the artist had conceived an imaginary scene laid in Greece which later is shown to be so accurate." So struck was Goadby by the similarity, he decided to re-christen his Parrish painting as "The Vale of Tempe."

The lot is also accompanied by a letter of authentication from Alma Gilbert-Smith that provides further history. Consulting Parrish's records, Ms. Smith found that the artist completed two different paintings of Pandora that were both submitted to Colliers. The first, a nude and the painting at hand, was submitted in November 1907, but the painting was returned, unused. In June of 1908 Parrish submitted a second Pandora to Colliers, this version with the figure in a diaphanous gown. The second painting was published by Colliers as "Pandora: Paradise for Children" in their October 16, 1909, issue and later appeared in Nathaniel Hawthorne's A Wonderbook of Tanglewood Tales in 1910.

We wish to thank Alma Gilbert-Smith for her kind assistance in cataloguing the lot.
Estimate $40,000-60,000

Inscribed on the backing with detailed care and hanging instructions by ".../Arthur Goadby/1910.

Craquelure overall appears stable. There are dots of retouch to fill small paint losses clustered in the l.l. corner, most losses ranging in size from pin point to 1/8 in, with the largest single loss measuring 1/4 in. The area of the clustered dots measures 5 x 3-1/2 in. at its extreme measurements, with most of the dots clustered in an area measuring 2 x 1-1/2 in.