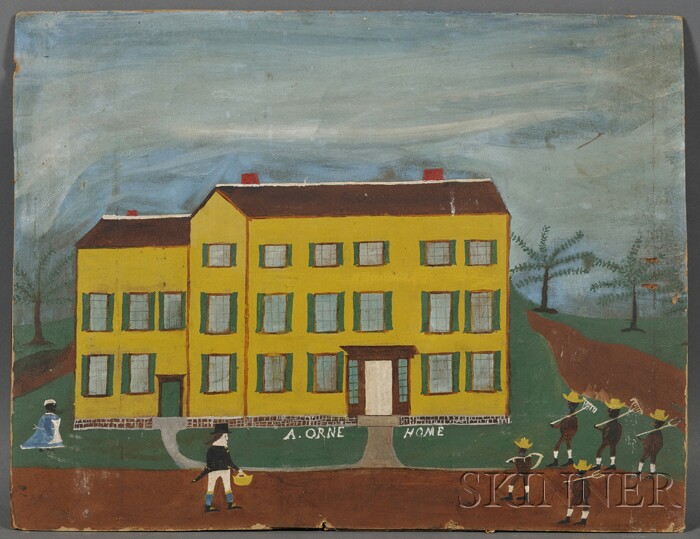 The "A[ZOR]. ORNE HOME," Marblehead, Massachusetts. Unsigned. The scene identified in an inscription l.c. Oil on paperboard, 20 x 26 in., in a period mitered wood frame. Condition: Minor paint losses to edges and background.

Note: J.O.J. Frost was an untrained artist and native of the seaside town of Marblehead, Massachusetts. He ran a seafood restaurant for most of his life, but after his wife's death in 1919, he began to sculpt and paint scenes of Marblehead life to educate the residents on their town's history.

The Orne family was among the first to settle in Marblehead, Massachusetts, and one of the most prominent families in the town's history. Azor Orne (1731-1796) was a patriot and fervent supporter of the American Revolution. He and his half-brother Joshua served together on the Committees of Correspondence, formed to call to the world's attention the grievances of the colonists. He was a colonel in the local militia, and also a successful merchant and wealthy landowner. The house depicted here shows several black servants with yard tools and a white gentleman holding a basket. Interestingly, the house was used in the 1830s in the "Underground Railroad" as a secret meeting place for the New England Anti-Slavery Society.
Estimate $15,000-25,000