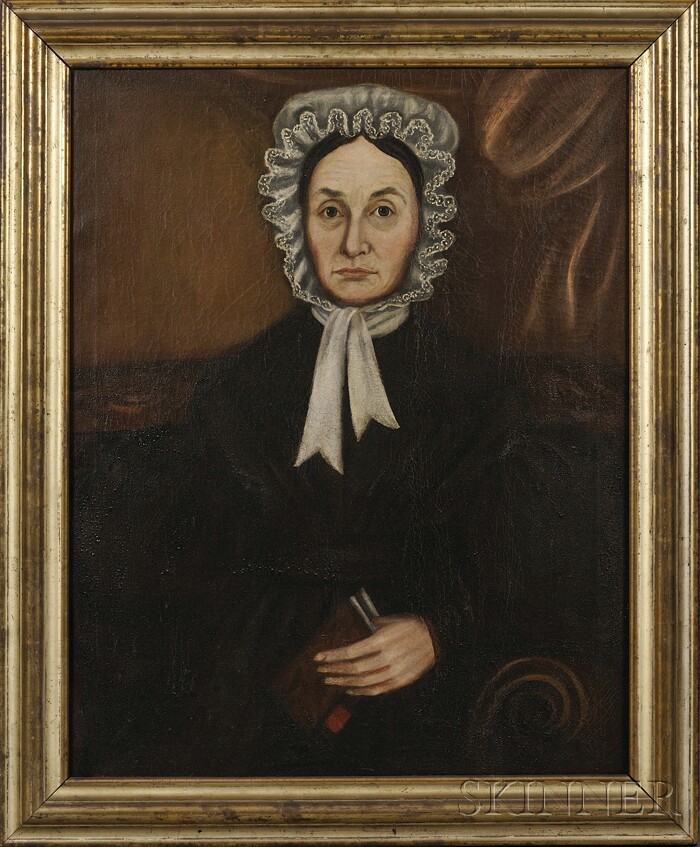 Note: Ruth W. Shute and her physician husband Dr. Samuel A. Shute were itinerant portrait painters known for their individual and collaborated watercolor portraits of individuals living in Massachusetts, New Hampshire, Rhode Island, Vermont, and northern New York State beginning in 1827. It appears Samuel became very ill around 1834-35 and was unable to paint. It has been discovered in recent times that several oil on canvas paintings, all executed by Mrs. Shute, and dating from 1834-35 were discovered in the Plattsburg, New York, and St. Albans, Vermont, area, indicating Ruth had taken the responsibility of earning a living by painting portraits in these towns while her husband was ill and being cared for by family in nearby Champlain, New York. Samuel died in 1836 at the age of thirty-two. Ruth subsequently moved to Concord, New Hampshire, remarried, moved to Kentucky, and continued painting until about 1839.

This is the only known labeled painting by the artist.

Repaint to several small spot on face, clothing, and background, canvas not relined. A copy of a purchase receipt of this portrait from Stephen/Douglas Antiques in 1994 indicates the painting was cleaned and heavy varnish build-up removed in Dec. 1994, by a good painting conservator used by many museums and dealers.