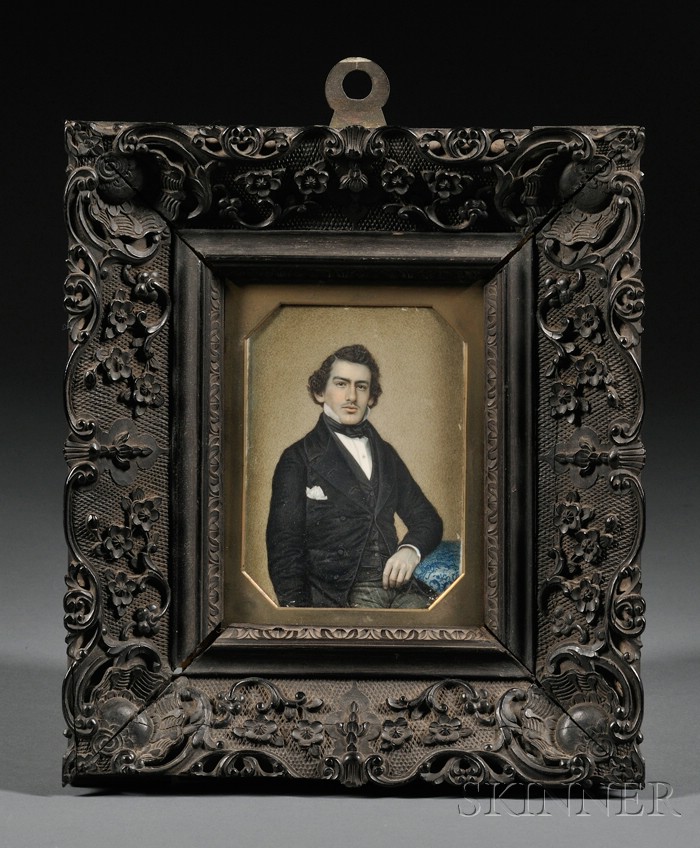 Literature: This portrait miniature is illustrated and discussed in The Decorative Arts of the China Trade, by Carl L. Crossman, the Antiques Collector's Club, publishers, 1991, pp. 150-51.

Note: According to the Ipswitch Historical Society and Museum's website, George Washington Heard Jr. (1837-75) was "the fifth child of George Washington Heard (1793-1863) and Elizabeth Ann Farley Heard (1802-65), George Jr. spent his boyhood attending school in Ipswich, Derry, and Exeter to prepare him for Harvard College. He entered Harvard, but completed his formal education in Geneva, Switzerland, according to Heard genealogist Edward W. Hanson.

Perhaps his love for mountain climbing developed in the Swiss Alps, because in 1855 Heard became one of the first Americans to scale Mont Blanc, the highest mountain in France.

In 1859, Heard went to China as a private secretary to the American delegation at the negotiation of the Treaty of Tientsin. Hanson writes that he 'was present with Mr. Ward, the American minister to China, at the attack of the Peiho forts by the English which he described in letters home to his parents.' Afterward, he joined his uncle's company, Augustine Heard & Co., as manager of the trading house in Canton succeeding his brothers John, Augustine, and Albert Farley. He remained with the company until its final collapse; he was the last of the four Heard brothers to leave the country.

George Washington Heard died at sea in 1875. He was aboard the S.S. Anadye in the Red Sea, returning to the United States. He was 38 years old and unmarried. He was buried in the nearby port of Aden, a city in Yemen, far away from the Heard family tomb in Ipswich, Massachusetts.