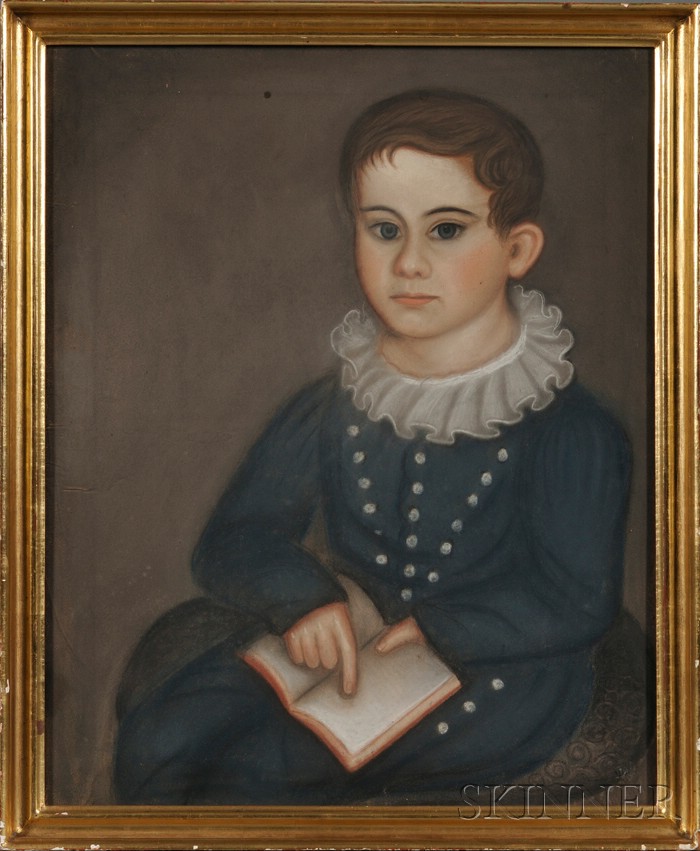 Note: George Murillo (or Morillo) Bartol was born September 18, 1820, in Freeport, Maine. He attended Brown University, graduating in 1842. He was ordained a minister in 1847 and served for 59 years at the First Church of Christ Unitarian, Lancaster, Massachusetts, the building designed by Charles Bulfinch of Boston. He married Elizabeth H. Washburn of Salem in 1856. George died June 20, 1906, and is buried in the Eastwood cemetery in Lancaster, Massachusetts.

Literature: See Folk Art, "Roses and Thorns: The Life of Susanna Paine," by Michael R. and Suzanne R. Payne, Winter 2005/2006, pp. 62-71. The article discusses the difficult life of the itinerant portrait artist Susanna Paine, as was revealed in her autobiography Roses and Thorns, or Recollection of an Artist: A Tale of Truth, for the Grave and Gay, written in 1854 at the age of 61. The painting of George Morillo Bartol is illustrated on p. 64.
Estimate $5,000-8,000

Minor creases c.l., small dark stain about 1/4 in. dia. at u.c., a few small lighter stains at the center of the top of his head and in the background. Does the frame appear to be original?- The frame has some age to it, it had been re-gilded, the glass is kind of wavy so it has some age to it.
The work is backed with newspaper, then stretched around a wooden stretcher. It isn't known if the artwork paper is laid onto the newspaper or if there is anything sandwiched between the art and the newspaper, the stretcher is nailed directly onto the frame.