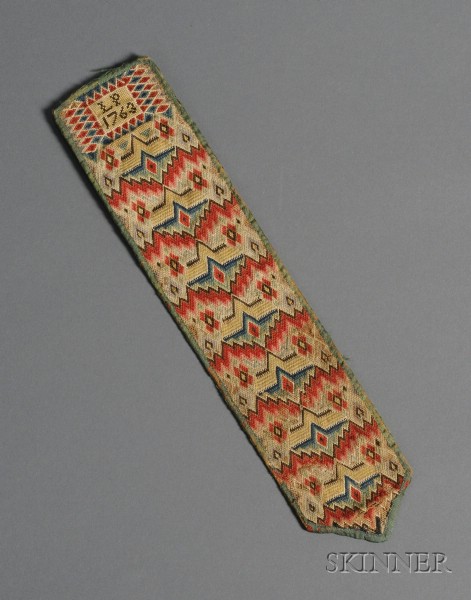 Literature: For similar examples see Labors of Love: America's Textiles and Needlework 1650-1930, by Judith Reiter Weissman and Wendy Lavitt, Alfred A. Knopf, New York, 1987, p. 114-115. They describe the roll-ups also called huswifs or housewife "an oblong pouch for needles, pins, and other smalls that rolled up and could be carried in the larger pocket..." that 18th and 19th century women wore under their skirts.

Note: Further research has revealed that a needlework pocketbook with nearly identical color arrangement and stitching is in the collection of the Los Angeles County Museum of Art, illustrated in Art of the Embroiderer, translated by Nikki Scheuer with additional commentary by Edward Maeder, Boston, Massachusetts, 1983, fig 119. The LACMA example is stitched with 'EP/1763,' and those initials have been identified as Elizabeth Parker's of Westchester County, Pennsylvania. According to Edward Maeder at Historic Deerfield, the present lot, signed 'LP/1763,' was almost certainly made by a relative of Elizabeth Parker, perhaps a sister.

There are scattered small spots of wool yarn loss, mostly to the edges, some losses and fraying to the silk edging.