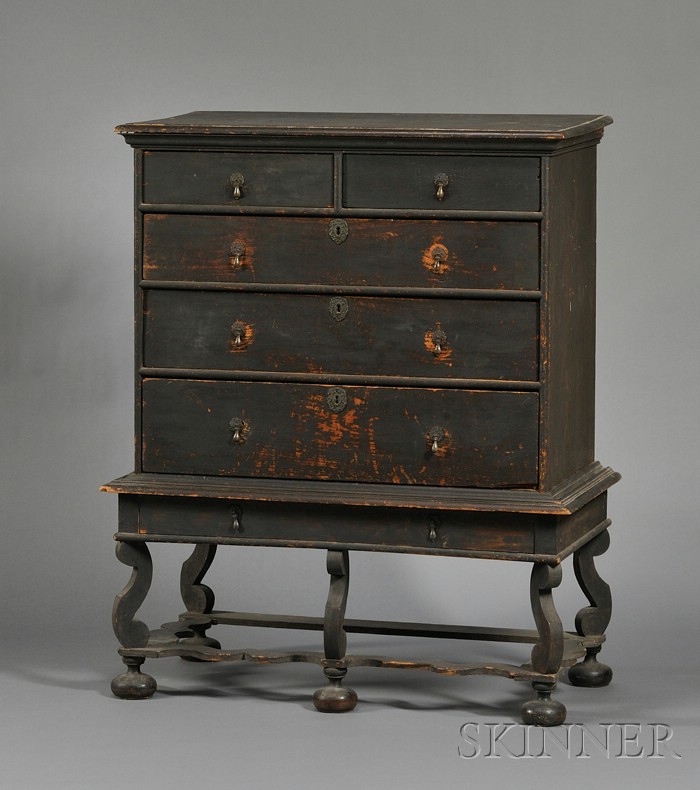 Provenance: Historic Winslow House, Marshfield, Massachusetts, proceeds to benefit the maintenance and conservation of the collection.

Literature: American Furniture, 1620 to the Present, Jonathan Fairbanks and Elizabeth Bidwell Bates, Richard Marek Publishers, New York, 1981, p. 52, illustrated. Fairbanks writes, "As recently as 1969, the location of this key specimen of the cabinetmaker's art in New England was not known to furniture historians. It was recognized as one of the rare signed and documented examples of the second major style of furnituremaking in this country. The chest's design shows a dramatic movement toward vertical composition. It is lifted off the ground with a curvilinear stand that reflects the energy of Baroque art. The flat S-scrolls of its base suggest that the maker, Edmund Titcomb, must have been well aware of fashionable London design, which by the 1660s had been strongly influenced by immigrant designers and craftsman from the Low Countries. The Anglo-Flemish traditions reflected in this piece are remarkably sophisticated, considering the town in which it was made was a very modest rural village well into the eighteenth century...The chest's strong silhouette and dramatic base make the work successful."
The Magazine Antiques, September 2001, "Careswell: the Historic Winslow House in Marshfield, Massachusetts," John P. Hermanson, pp. 312-319, illustrated.
Estimate $100,000-150,000