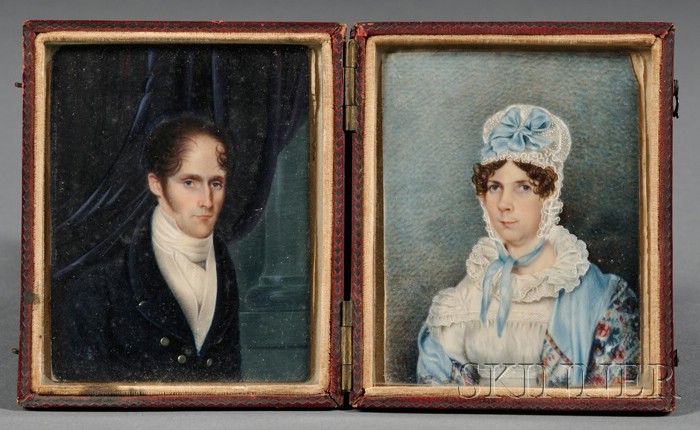 Portrait Miniatures of John Parker Rice and His Wife, Sally Crowninshield Rice, watercolor on ivory portraits, the portraits reportedly depicting Sally Crowninshield (1785-1847) by Sarah Lockhart (American, 1793-1877, ac. Salem, Massachusetts), 3 1/4 x 2 1/2 in., housed in a hinged red leather case side by side with a portrait miniature of her husband, John Parker Rice, by Nicholas Marcellus Hentz (French, 1797-1856); accompanied by a copy of the portrait of John Parker Rice by Hentz, housed in a similar red leather case.

Exhibitions: The portraits of John Parker Rice and Sally Crowninshield were on view at the commemorative exhibition One Hundredth Anniversary of the Building of "Cleopatra's Barge" 1816-1916, held at the Peabody Museum in Salem, Massachusetts, July 17-September 30, 1916. The portraits are listed in the exhibition catalog on p. 31, which was published in 1916 by the Peabody Museum. The exhibition commemorated the building of the brig Cleopatra's Barge, which was built in 1816 in Salem for owner George Crowninshield, Jr. (1766–1817), Sally's brother. Two small identification placards which were inscribed for the portraits at the 1916 exhibition are included with the lot.
Estimate $1,500-2,500

Pair: Sally- small sliver of ivory missing u.r. corner, two small specks of paint loss on her shawl l.l. and underarm shadow l.l., unobtrusive small area of paint muddle just to left of left-facing shoulder; John Rice-Unobtrusive retouch to small area on jacket arm l.l., and to column l.r.; the case shows signs of wear to edges and high areas, one curved latch clasp is missing.
Single portrait of John Rice- is a little smaller than the one framed with Sally, its in very good condition; the leather hinge on the case is split apart, (separated), and shows wear spots on the edges and high points..