N.C. (Newell Convers) Wyeth (American, 1882-1945) And They Did Their Trading from the Top of Battlemented Walls 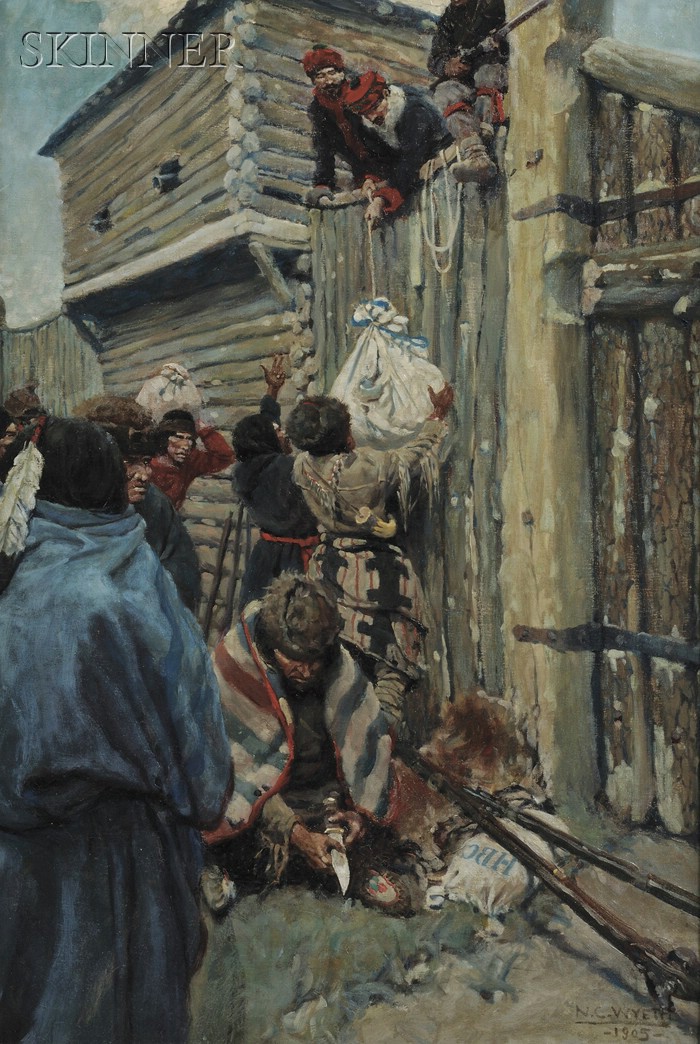 N.B. N.C. Wyeth completed this painting in 1905 as a commission for the Saturday Evening Post. It is one of four illustrations done by Wyeth to accompany a story by Arthur E. McFarland, titled "An Antiente Greate Companie," about the Hudson Bay Trading Company, which appeared in Volume 178, No. 20, on November 11, 1905.

In a letter from N.C. Wyeth to his mother, dated October 1, 1905, the artist referred specifically to the painting at hand, saying "I have just completed a huge picture of the Cree Indians trading over the stockade with the early French, for the Post. It's in full color and H.P. says it's one of the most realistic pictures ever done in the school. You might know how I feel. Oh! if I only had time to paint what I have in my mind. I'll do it some day." (1)

The reference to "H.P." (Howard Pyle, 1853-1911) is a telling one. A noted and popular illustrator, writer, and teacher, Howard Pyle has been called the "Father of American Illustration." Pyle founded the Howard Pyle School of Illustration Art in Wilmington, Delaware, in 1900, creating a school and art colony that would become known as The Brandywine School. Wyeth entered Pyle's school in October 1902, after study at the Massachusetts Normal Art School, where his teacher Richard Andrews had urged him toward illustration. (2) When Wyeth graduated in August 1904, he remained among a close-knit group of Pyle's life-long devoted students. The praise from Pyle quoted in the letter would have meant much to the young artist.

Howard Pyle was an influential and inspired teacher, who encouraged the use of dramatic effects in illustration and urged his students to paint from experience, thereby endowing their works with immediacy and realism. These lessons were well learned by N.C. Wyeth. In September 1904, after his graduation, Wyeth made his first excursion west, on a trip sponsored jointly by the Saturday Evening Post and Scribner's. (3)Wyeth would develop a distinguished career as an illustrator, with his pictures appearing in many of the most popular magazines of the period, such as Century, Harper's Monthly, Ladies Home Journal, McClure's, Outing, and Scribner's. Among his most loved illustrations are those done in 1911 for Robert Louis Stevenson's Treasure Island, and Wyeth illustrated many other books for Scribner's Illustrated Classics series. N.C. Wyeth was also a noted muralist with commissions in banks and libraries in the northeast, as well as the altar in the Chapel of the Holy Spirit in the National Cathedral in Washington, D.C.