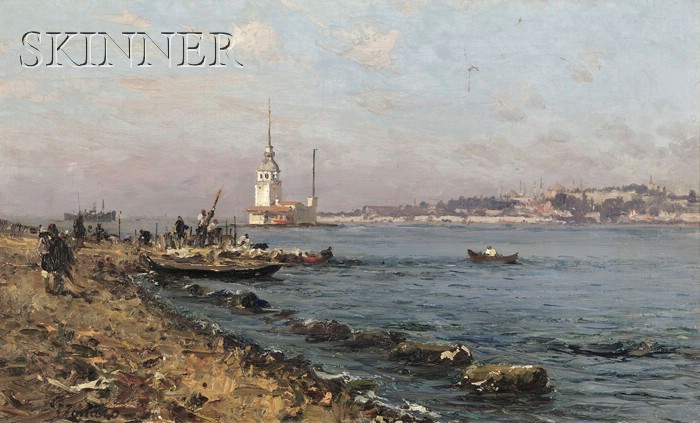 Provenance: Gift to Georg Ruckmann (1870-1961) of Lübeck, Germany, from a doctor that fled to Turkey before World War I; by family descent to a private New England collection. Ruckmann was an administrator of a hospital in Lübeck.

N.B. The authenticity of this work has been confirmed by Erol Makzume, and the work was documented in Elisa Zonaro's photo archives. We wish to thank both Erol Makzume and Cesare Mario Trevigne for their assistance with cataloguing the lot.

Zonaro was born into a Paduan family of modest means, and had he not shown artistic promise as a child, would have been apprenticed into his father's bricklaying trade. (1) He was fortunate to attend a technical school near his hometown, and was later sponsored by a local noblewoman to attend the Accademia Di Belle Arti G. B. Cignaroli in Verona for his artistic training.

After graduation, Zonaro moved to Venice where he opened his own studio on the Grand Canal. He developed a fine reputation for picturesque views and genre scenes which was bolstered by ducal patronage. Despite his commercial success, Zonaro grew dissatisfied by the late 1880s with his lack of artistic growth and sought ways to distinguish himself from his contemporaries.

At this juncture, he made two critical decisions-the first was to take a year-long sabbatical in Paris to learn new techniques. Zonaro's works created after this intensive year are considered to be in his mature style, where "the product of his training in French Impressionism, Venetian coloring, and Neapolitan realism were fused." (2)

Zonaro's second life-changing decision was to move to the city of Constantinople. He was fascinated with the exotic vision of this outpost of the Roman and Ottoman Empires, and opened a studio there in 1891. Through his skill and the promotional efforts of his wife and former pupil Elisabetta (Elisa) Pante Zonaro, he was introduced to the Ottoman Sultan Abdul Hamid II (1842-1918) who selected him as his court painter in 1896. Zonaro remained at the court until Abdul Hamid II's regime was overthrown in 1909, and returned to Italy thereafter.

Scattered paint losses and abrasions to upper right quadrant (sky). Paint losses to lower center on foreground rocks, with losses measuring from approximately 3/8 to 3/4 in. Vertical abrasion or similar to l.r. corner about 2 inches in length. Craquelure occuring mainly across the top half of the composition (in the sky), but also to l.r. corner. Re-stretched on a new stretcher with a label from Rhode Island Picture Frame, Warwick and Wakefield, R.I., affixed to the bottom bar.