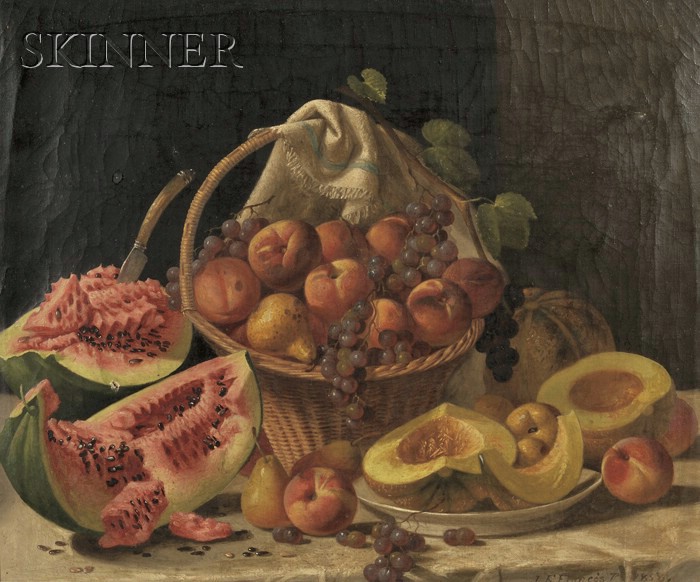 N.B. John F. Francis was born in 1808 in Philadelphia, and lived and worked in Pennsylvania. Little is known about his art training, although he began his career as a portrait painter in the 1830s and 1840s. He turned to still life painting in the early 1850s and, during the next thirty years, became one of the most accomplished still life painters of the 19th century, establishing himself as "the master of luncheon and dessert pictures." (1) Francis was interested in the ordering of shapes and in expressing the individual, tactile qualities of the objects he depicted. His still lifes range from simple table-top studies to elaborate compositions with fruits, nuts, cheeses, baskets, serving pieces of glass, ceramic, and metal, and various utensils, set usually against a simple background but occasionally with a view through to a landscape on one side. In After the Hunt, Alfred Frankenstein wrote that Francis used a very limited repertoire of items in his still lifes and often repeated motifs, making his paintings difficult to date. Frankenstein further noted that dated paintings were somewhat rare, citing only twelve dated examples from 1854 to 1879 among the oeuvre known to him at that time. (2) In the painting at hand, one of his more elaborate, Francis employed some of his favorite motifs, the rough-cut watermelon, various fruits opened or quartered, and a fruit basket draped with a fringed napkin.