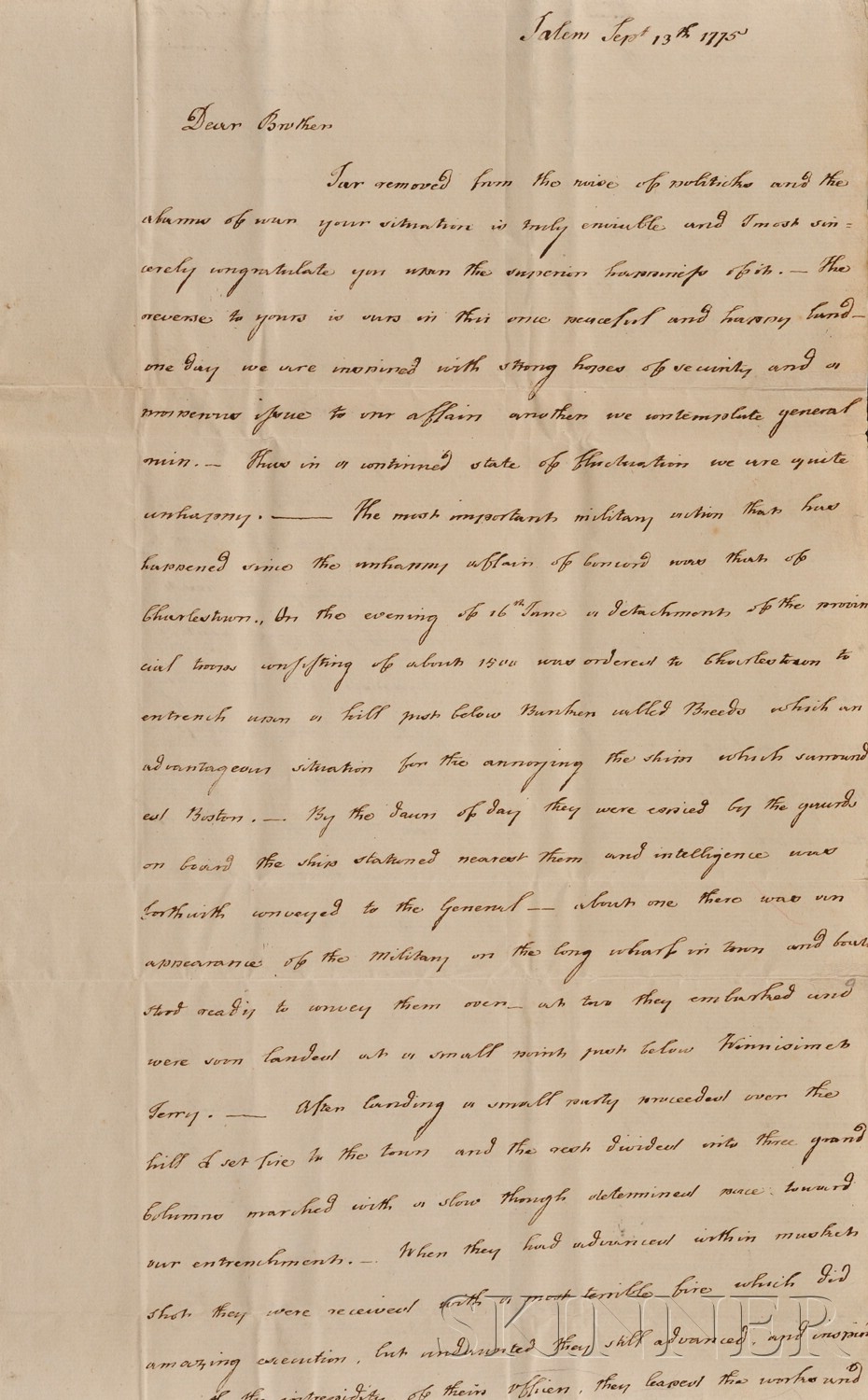 (Revolutionary War-Breed's Hill Archive), Barnard Family, Archive of thirteen letters including an important eyewitness account of the Battle of Breed's Hill/Bunker Hill, April 1772-August 1795; the early letters mostly family news and business/trade related themes and happenings in the greater Salem area, including a small pox outbreak in 1773, Reverend Bernard much news about church related activities; a letter from Thomas Barnard to brother Benjamin on May 3rd, 1775, relates "....and now fear some has happened amiss. And we have no reason to suppose much Prosperity, for there is a most terrible cloud upon our public affairs, such a Tempest in our political affairs...Boston is besieged-a Fleet in its Harbour-A large army within the Town. A numerous Army of Provincials mustered near Cambridge. Total stoppage of business-salary men are beggars...April 19th last. Was a fatal Day, filled with blood...what will be the end of these calamities, God only knows."; On June 26th, 1775, Thomas Bernard's comments on the general health of the provincial army, "Our Camp it is said is very healthy, but it would be wonderful if they should not be sickly...we do not hear that the Provincial camp is infected...God of his Mercy save us from such an event."

Letter from J. Jackson to Jonathan Barnard, Salem, June 17th, 1775, text in part: " ...for I know not what particulars you have heard respecting our Movements in the quarter lately - you must have heard by this Time we are engaged warmly in a Defensive War in every Encounter hither to have got the advantage...Gage has lately had a Reinforcement from England but with four times his numbers he will never conquer the Country - Trade by Sea is entirely at an End here. War - Army - Navy are more familiar terms - our Distresses are not small...but our Spirits are still high - our Cause is good & it is my Opinion to Subdue this People near one half of the Males must be destroyed - we are like to be supported in all defensive measures by the whole Continent - if GR still persists in their Obstinancy the War will be bloody..."

Letter from Jonathan Barnard to his brother, September 13th, 1775, text in part: Far removed from the noise of politicks and the alarms of war your situation is truly enviable and I most sincerely congratulate you upon the superior happiness of it. The reverse to yours is ours in this one peaceful and happy land. One day we are inspired with strong hopes of security and or prosperous issue to our affairs another we contemplate general min (?) . The most important military action that has happened since the unhappy affair of Concord was that of Charlestown. In the evening of the 16th June a detachment of the provincial troops consisting of about 1500 was ordered to Charlestown to entrench upon a hill just below Bunker called Breeds which an advantageous situation for the annoying the ships which surround east Boston. By the dawn of the day they were copied by the generals on board the ship stationed nearest them and intelligence was forthwith conveyed to the General --about one that was an appearance of the military on the long wharf in town and boats stood ready to convey them over. At two they embarked and were soon landed at a small point just below Winnisimet Ferry. After landing a small party proceeded over the hill and set fire tot the town and the rest divided into three grand columns marched with a slow though determined pace toward our entrenchments. When they had advanced with musket shot they were received with a most terrible fire which did amazing execution, but undaunted they still advanced and inspired with intrepidity of their officers, they leaped the works and dislodged our people sword in hand. Our Countrymen before they retreated behaved with bravery and afforded a full demonstration to administration that they would fight and fight desperately. They maintained their ground as long as it was tenable and had they been properly reinforced they would have drove back the King's troops with amazing slaughter and maintained it to this day. Terrible indeed was that scene even at our own distance. The Western horizon in the day was one huge body of smoke and in the Evening a confirmed blaze and the perpetual sound of Cannon and vollies of muskets worked our disturbed imaginations to an high degree of fright. The unhappy fate of Charlestown diffused melancholy over every countenance and caused the tears of compassion to flow from every eye. This affair happened on Saturday - the next day instead of being spent in the house of God was spend in our streets enquiring of every horseman who came along.....Bunker's hill also is strongly fortified by the Regulars. Both armies have stood & looked at each other ever since without altering their situations & have done nothing to annoy accept by firing Cannon & shells which some days hath been incessant...God forbid that there should be no alternative but absolute submission to the horrors & desolation of war."

The Barnard family found themselves squarely in the midst of the early day of the Revolutionary war......