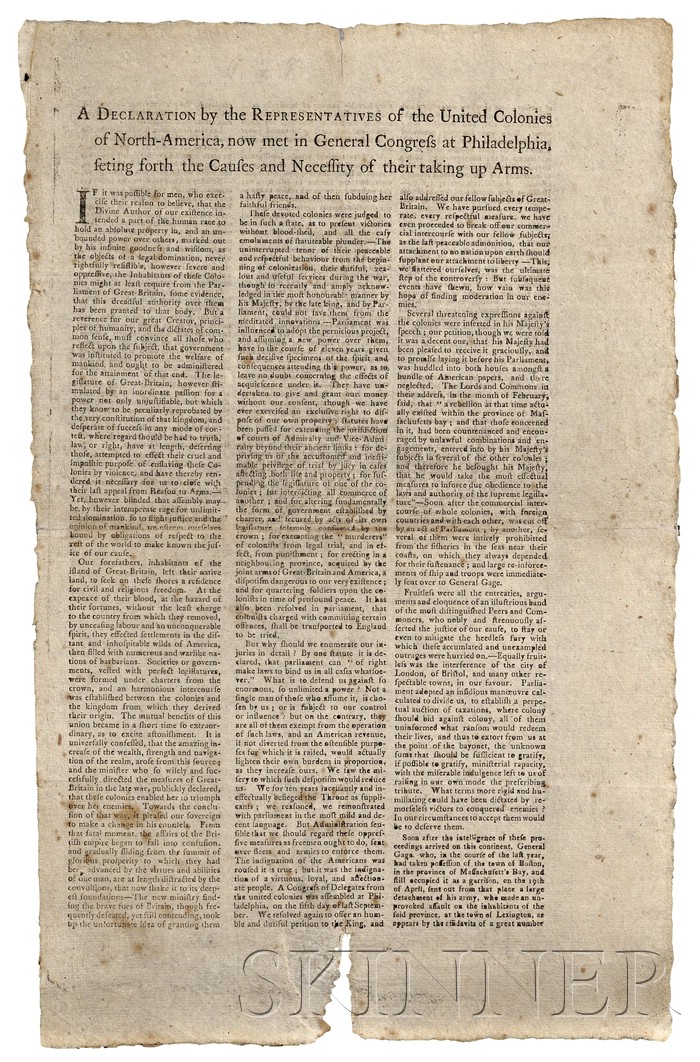 (Declaration for Taking up Arms, Second Continental Congress), Rare and Important Broadside, July 6, 1775, two pages, New York: John Holt, [July, 1775], signed in the type by John Hancock and attested to by Charles Thomson, entitled "A Declaration by the Representatives of the United Colonies of North-America, now met in General Congress at Philadelphia, seting [sic] forth Causes and Necessity of their taking up Arms", detailing the history of the settlement of America, the cooperation during the French and Indian War and the subsequent confusion and unpredictability of the English government, detailing a checklist of offenses perpetrated and lambasting the attempts (ignored) to address such grievances, and later detailing the most current and egregious behavior by General Gage at Lexington, Concord and Charlestown, Massachusetts, folio, (triangular loss at center lower margin not affecting text, scattered minor spotting, professional fold strengthening on reverse at upper center fold and center left). Evans

Note: In a stirring and powerful broadside prescient to the Declaration of Independence ordered almost exactly one year later, the Second Continental Congress details its' right to assemble and take up arms. As the colonial governors sought to prevent such assemblies, the current Congress was certainly extra-legal and could have been be viewed as revolutionary. While Independence was on the minds of the current members of the Second Continental Congress they were, as is evident in the last paragraph, willing to suspend their actions if action was taken. Thomas Jefferson drafted the original language for this broadside but it was deemed too incendiary and the final draft was written by John Dickinson and adopted on July 6, in time for the newly appointed General George Washington to have it in hand upon his arrival in Boston,

Text in part:
"however severe and oppressive, the inhabitants of these colonies might at least require from the Parliament of Great Britain some evidence that this dreadful authority over them as been granted to that body...attempted to effect their cruel and impolitic purpose of enslaving these colonies by violence, and have thereby rendered it necessary for us to close with their last appeal from reason to arms".

"their intemporate rage for unlimited domination, so to slight justice and the opinion of mankind, we esteem ourselves bound, by obligations of respect to the rest of the world, to make known the justice of our cause".

"They have undertaken to give and grant our money without our consent...statutes have been passed for extending the jurisdiction of courts of admiralty...for depriving us of the accustomed and inestimable privilege of trial by jury...for suspending the legislature of one of the colonies; for interdicting all commerce to the capital of another; and for altering fundamentally the form of government established by charter...for exempting the "murders" of colonists from legal trial and in effect, from punishment...and for quartering soldiers upon the colonists in time of profound peace".

"General Gage, who has taken...possession of the town of Boston...on the 19th of April...made an unprovoked assault on the inhabitants of...the town of Lexington...thence the proceeded in a warlike array to the town of Concord...killing several and wounding more, until compelled to retreat by the country people suddenly assembled to repel this cruel aggression."

"Our cause is just. Our union is perfect".

"we will, in defiance of every hazard, with unabating firmness and perseverance, employ for the preservation of our liberties; being with our [one] mind resolved to die free men rather than live slaves."