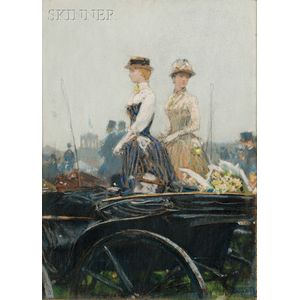 Childe Hassam (American, 1859-1935) At the Grand Prix
click on any image to enlarge
Previous Next

At the Grand Prix, c. 1887
Signed 'Childe/Hassam' l.r., inscribed 'given to me by A.L.A for Victorian Room'
on a label from Worth Avenue Gallery, Palm Beach, and with an envelope from Mrs. Maitland Alexander, Sewickley, Pennsylvania, affixed to the backing.
Pastel and graphite on paper/board, sight size 11 1/2 x 8 1/4 in. (29.2 x 21.0 cm), framed.
Condition: Not examined out of frame.

Frederick Childe Hassam worked in pastel for a brief period in the late 19th century, and was one of the last new members admitted to the Society of Painters in Pastel in 1890. (1) Hassam's earliest known work in pastel dates to 1887 when he was in Paris studying at the Académie Julian, and he is believed to have made approximately eight pastels between 1887 and 1889. (2)

The present work was likely one of three 'very spirited little pictures representing scenes at the Grand Prix de Paris' reviewed in The Art Amateur for the fourth and last exhibit of the Society of Painters in Pastel held May 1890 at the Wunderlich Gallery in New York. (3) The existence of two other small pastels of the Grand Prix are known: Watching the Grand Prix, Longchamps, 1889, 14 x 10 inches, location unknown, and At the Grand Prix in Paris (Au Grand Prix de Paris), 1887, 18 x 12 inches, Corcoran Gallery of Art, Washington D.C. According to Kathleen Burnside, the present work may also have been exhibited at Doll & Richards in Boston, February 1891.

The Paris Grand Prix Day parades ushered in the beginning of each horse racing season, and were spectacles of power and elegance. In 1887, Hassam created two, nearly identical large-scale compositions of the Grand Prix procession in oil, one of which was shown at 1888 Paris Salon and described as 'a very brilliant picture, full of life and light and movement, and instinct with the gayety of the bright French capital.' (4) The two works—at the Museum of Fine Arts Boston and New Britain Museum of American Art, respectively—depict rows of carriages on a boulevard near the Champs-Élysées and couples in fashionable dress, executed with his characteristically tight brushwork and dappled light effects.

By contrast, the present work imparts a softer, more relaxed mood, owing largely to the looseness of the medium. The scene depicted as well is more relaxed—the race-goers have finally arrived at the course in the Bois de Boulogne where they are less implicitly 'on display' and focused on watching the race from their carriage. In capturing the stray glance of the one young lady in the present work, Hassam creates a sense of intimacy for the viewer and individualizes his subject.

Due to the fragile nature of pastel and to the fact that the drawing has been sealed in this frame undisturbed since the 1940s, the pastel was not examined out of the frame and will not be opened during previews. Visible inspection shows no damage or restoration, probable toning of paper. It appears that the work has slipped slightly in its mat, and there is subtle wear and very minor pigment displacement to the visible edges.