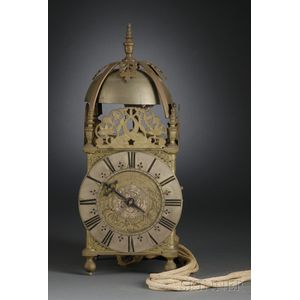 Weights and counter weights are replacements, bell has been brazed with limited success, surface rust on steel components, side doors are sensitive replacements although without wings, lacking pendulum bob, movement needs cleaning, other probable restoration.
Note: the crown wheel and warning wheel appear to be more recent arbors and pinions; wheels are mounted on arbors without collets and most pinions have very little wear which would be inconsistent with an early date, clock very likely 20th century.