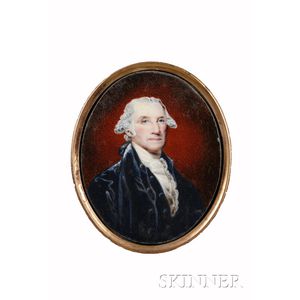 Note: William Birch was a celebrated enamellist, painter, and engraver. He was born in Warwickshire, England, on April 19, 1755. He learned the basics of enameling as an apprentice to London goldsmith Thomas Jeffrey and later under Henry Spicer, and exhibited enameled miniatures at the Royal Academy and the Society of Artists. In 1794 Birch and his family emigrated to Philadelphia and he soon began producing works in enamel, the first to introduce enamel painting in America, for which he received wide acclaim. He made landscapes, copies of Old Master paintings, and portrait miniatures. His most notable enamel portraits were the approximately sixty portrait miniatures of George Washington, after a portrait done of Washington by Gilbert Stuart for John Vaughan. The portrait offered here is one of those sixty.
Estimate $4,000-6,000

Minor surface imperfections to upper edge, possibly due to enamel firing. Under blacklight, no evidence of inpainting.