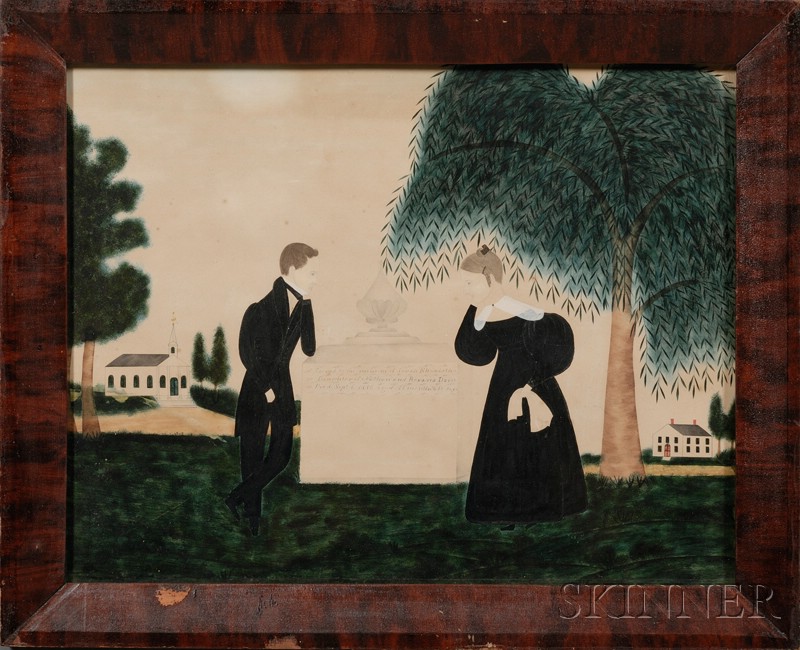 Mourning Picture. Unsigned. Watercolor on thin card, c. 1836, depicting a man and woman grieving beside a monument, inscribed "Sacred to the memory of Sarah Elizabeth/Daughter of Nathan and Roxana Davis/Died Sept. 1, 1836/aged 11 months 10 days.," with a church, weeping willow tree and a house in the background, 14 1/4 x 17 3/4 in., in the original grain-painted frame. Condition: Toning, minor foxing.

Literature: According to The Genealogy of the Ball and Weston Families by John Edward Jewett, 1867, published at the Sentinel office, Fitchburg, Massachusetts, p. 19: Roxan[n]a Ball was born November. 23, 1804, (probably at Townsend, Massachusetts). She married Nathan Davis of Acton, Massachusetts on December 10, 1834. Their first child, Sarah Elizabeth, whom they are depicted mourning, was born on September 22, 1835 and died September 1, 1836. They had three other daughters, and another died at two years of age. The genealogy also indicates Roxan[n]a married again, on October 5, 1862, to Edward Walker of Townsend, by whom she had Edward E. Walker.