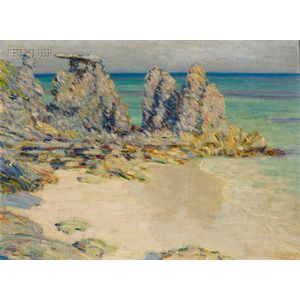 Will Howe Foote (American, 1874-1965) Bermuda Coast
click on any image to enlarge
Previous Next


N.B. Will Howe Foote was born in Grand Rapids, Michigan, but he is most closely associated with Old Lyme, Connecticut. Foote first arrived in Old Lyme in 1901 and returned each summer to paint with fellow Impressionists. Foote also traveled extensively and spent the winter months in warm climates, including the Carribean, Mexico, and the American Southwest. He also traveled to Bermuda between 1916-1932.1