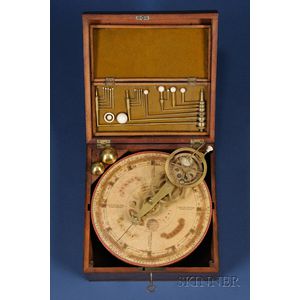 New Portable Orrery Set by William Jones, comprising mechanical tellurium with lacquered brass gear train, hand-turned action, engraved ivory Earth and brass Moon revolving on their respective axis around 1 1/4-inch dia. Sun, with paper-covered brass Zodiacal calendar denoted by sigils and Arabic chapter ring showing the phases of the moon, on 7 1/2-inch dia. oak base with illuminated paper calendar marked in riband A New Portable Orrery, Invented and Made by W. Jones and Sold by him in Holborn, London, the interior illustrating Mercury, Venus, Earth, Mars, Jupiter, Saturn, Georgium Sidus (Uranus), and Comet, the middle illustrating the seasons, the longest and the shortest days, the Autumnal and the Vernal Equinoxes, the exterior illustrating the compass points, and months of the Gregorian and Zodiacal calendars by name and symbol, calibrated in individual days and edged in red; lacquered brass planetarium with 1-inch dia. Sun and six arms supporting turned ivory planets and their moons on separate rings, with threaded mount interchangeable with planetarium on calendar base, in fitted felt-lined mahogany case; all pieces stowing in original dovetailed mahogany case with storage for the two sun balls and divider to secure planetarium and base, 8 1/2 in. square.

Georgium Sidus is the original designation for the planet Uranus, observed by Sir William Herschel in 1781, and named in honor of King George. The name remained until 1850 when it was changed in the standard usage to Uranus, the Latinized version of the Ouranos, god of the sky in Greek mythology and father of Saturn.

Planetarium has original lacquer, one arm is a replacement and not lacquered.