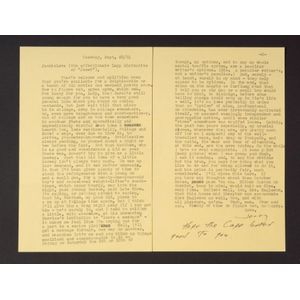 Salinger, Jerome David (b. 1919)
click on any image to enlarge
Previous Next

Salinger, Jerome David (b. 1919), Important archive of sixteen signed letters and one autograph note signed, signed Jerry, Armand, J.D. Salinger, Dr. Bones, Scott Weinfeld, Jr., Rory, and Juan Pedro comprising thirty-eight pages of mostly single-space typewritten text, March 10, 1980, through August 9, 1982, Janet Eagleson, recipient, comprising an extensive array of thoughts, theories, and comments on a variety of issues including his extensive experience and interests in astrology, his thoughts on the press, baseball, his devotion to homeopathic treatments, the women's liberation movement, the personal travails of the recipient, and movies. Salinger is very forthright in his assessments of all of these subjects and quite thoughtful concerning parental issues and his own relationship with his family; sold together with copies of the letters sent to Salinger and the People magazine article which prompted the initial letter.
Estimate $40,000-50,000