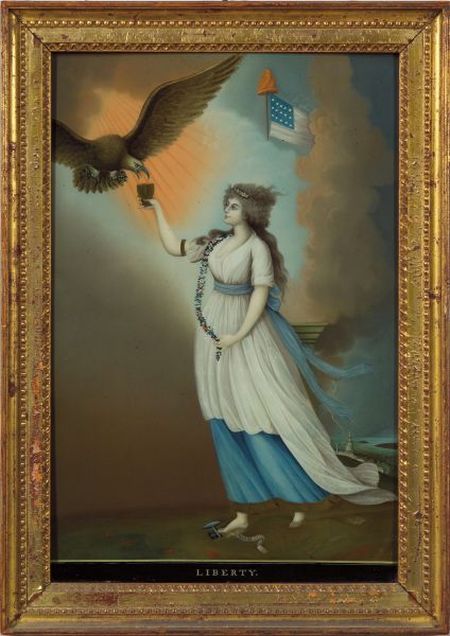 Literature: A similar Chinese export reverse painting on glass is illustrated in The Decorative Arts of the China Trade, by Carl L. Crossman, The Antique Collector's Club, publishers, p. 217, plate 122.

Note: Artists and propagandists in the late 18th and early 19th centuries often drew from a standard set of images, figures, and symbols chosen for their connections to revolutionary ideology and republican values. In fact, it is almost impossible to find any image created during the American or French Revolutions that does not contain several of these icons. This particular work of art represents a fantastic example of how artists were able to integrate many these symbols into a single, allegorical image.

Here, we see Lady Liberty as the Goddess of Youth Hebe, dressed in a flowing Classical robe, giving sustenance to the American eagle descending from the heavens with an approving sunburst blessing his wings. In this moment, Liberty is literally bringing light to a darkened world. It is not a coincidence that she stands before a partially obscured Doric column; artists were not subtle when connecting the new Republican age to the Classical one. At Lady Liberty's feet are additional symbols of the era's revolutionary sentiments: a royal garter, a key, chains and a broken scepter, signifying the destruction of the tyrannical bonds that once had given the British monarchy power over the Americans. Behind Liberty is the port of Boston, home of the legendary Tea Party and the target of the "Intolerable Acts."

The artist has also shown a strike of lightning reaching from the sky, perhaps to indicate the upcoming storm that would bring the winds of change to the city. (Similarly, in Jacque-Louis David's 1791 The Tennis Court Oath a lightning bolt strikes a church in the painting's background, while gusts of wind turn umbrellas inside out). Electricity also was a commonly used symbol for the Enlightenment, especially, thanks to Benjamin Franklin's experiments, signifying the American contributions to Enlightenment thought. This was not only in America: a 1770 British political cartoon entitled "Political Electricity" showed how revolution could grow from a single spark.

Finally, towering above the entire image is the American flag, with fifteen stars (this was the case between 1794 and 1818), attached to a pole topped by the liberty cap that appears in almost all contemporary, revolutionary images.

Considered together, these images unite to convey optimism during the early years of the latest, and greatest, Republican experiment, optimism that Lady Liberty would be able to thrive in the "city upon a hill."
Estimate $40,000-60,000