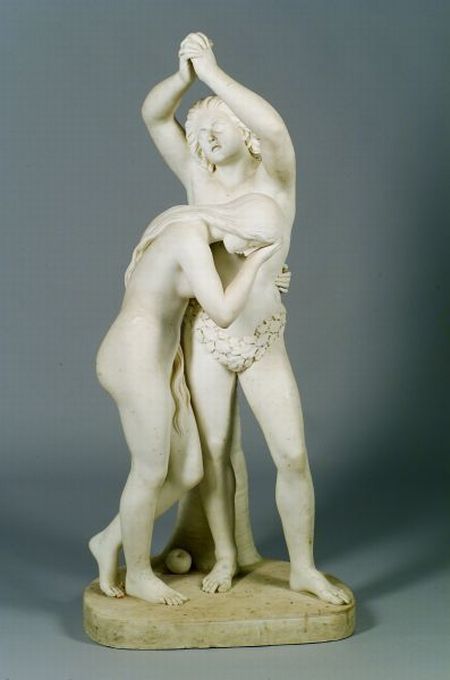 Adam and Eve
Signed and inscribed "CRAWFORD, FECIT, ROME 1856" on the back.
Marble, height 55 1/2 in. (141.0 cm), base 24 x 20 in. (61.0 x 50.8 cm).
Condition: Thumb and ring finer of Adam's right hand broken, hairline cracks to the reverse, scattered surface losses, wear to surface, surface grime. Provenance: A private mid-western collection.
N.B. Arguably the most important American Neoclassical sculptor, Thomas Crawford is best known for his figural works executed in marble. Born in New York, in 1835 Crawford left for Rome to study with Danish sculptor, Bertel Thorwaldsen. There, he set up a studio where he received commissions from the visiting American tourists. Although he made several trips back to the United States, Crawford spent the majority of his career working in Rome. Although, this piece is one of only two known marble sculptures of Adam and Eve completed by Crawford, he worked with this figural grouping for many years. Crawford's depiction of Adam and Eve reflected the mid-19th century revival of Christian art however was unique in that it is one of the few 19th century American works that include both Adam and Eve (Eve appeared more frequently alone). Crawford created a plaster cast of Adam and Eve in his New York studio in 1843. In a letter he wrote to his friend Charles Brooks dated July 1843, Crawford writes that he chose this subject of Adam and Eve because he believed it to be, "the most forcible expression of grief, that humanity is capable of"(i). Although this plaster cast stood over 9 feet tall, the arrangement was similar. A friend from Boston, William Gillespie, visited Crawford's studio in Rome in 1843-44 and described the pair. He writes, "Adam clasps his hands in almost hopeless supplication, and looks to Heaven with a despairing, yet imploring glance of intense agony."(ii) He says of Eve, she "clings to him with feminine dependence…her left arm is clasped around him, but her right hand is convulsively pressed against he eyes, so as to shut out the sight of the fatal apple which lies at her feet."(iii) The only other known marble version, which stands 54 1/2 inches tall and is dated 1855, is now in the collection of the Boston Athenaeum. The version in the Athenaeum was purportedly commissioned by Bostonian Franklin Dexter when he visited Crawford's studio in Rome in 1852. These versions reveal slight alterations. For example, the serpent beneath Adam's foot was removed and his loin was covered with oak leaves. I Dimmick, Lauretta. A Catalogue of the Portrait Busts and Ideal Works of Thomas Crawford (1813 - 1857), American Sculptor in Rome. Dissertation submitted to the Graduate Faculty of Arts and Sciences in partial fulfillment of the requirements for the degree of Doctor of Philosophy (History of Art). University of Pittsburgh, 1986. pp. 229 - 246 II Ibid. III Ibid.
Estimate $75,000-150,000 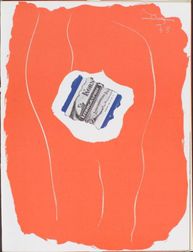 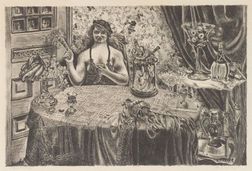 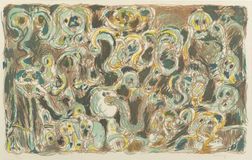 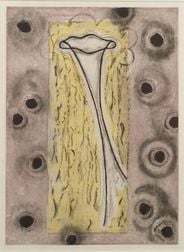 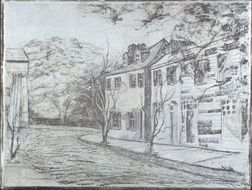 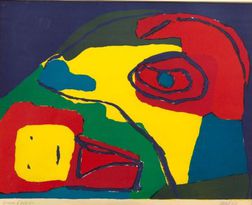 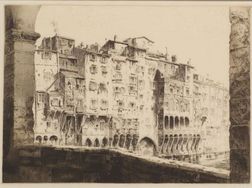