Pair of Portraits of Mr. and Mrs. Azor Orne. Unsigned. Pastel on paper, sight size 19 5/8 x 15 5/8 in., mounted in gilt gesso oval frames. Condition: Good, not examined out of frames.

Note: Azor Orne was an American patriot, born in Marblehead, Massachusetts, July 22 1731 and died in Boston, June 6, 1796. Before the Revolution he was a successful merchant. He became involved to the patriot cause, and in 1774 was a delegate to the Essex convention and the Provincial congress. He was also a member several civic organizations including committees of safety, of military affairs, on the organization of forces, and on the collecting of arms and ammunition. He became a judge of the general court in 1775, and in January, 1776, was appointed by the Provincial congress one of the three major-generals of Massachusetts militia. After the adoption of the state constitution in 1780 he was in the state senate and council for many years, refusing higher office on account of his lack of early education.
Estimate $1,000-1,500

both portraits in good condition 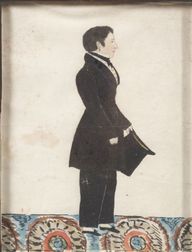 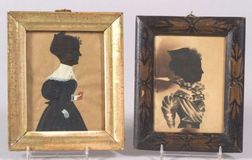 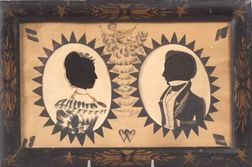 American School, 19th Century Double Silhouette Portraits of a Lady and Gentleman with Cupid and Hearts. 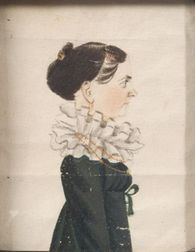 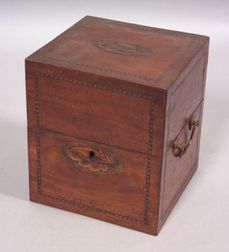 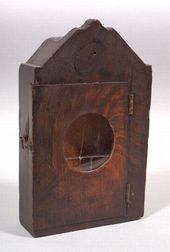