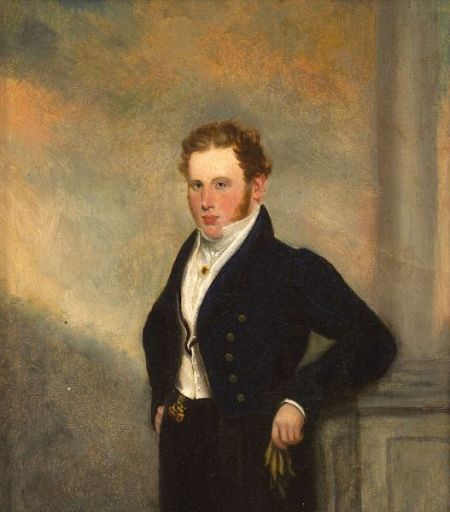 Portrait of a Gentleman Leaning on a Column. Unsigned. Oil on canvas, c. 1830-35, half-length portrait depicting the standing gentleman wearing a dark blue jacket with brass buttons, white vest and shirt, with one arm resting on the plinth of a column, holding a pair of gloves, 12 x 10 in., in a molded giltwood frame. Condition: Craquelure, relined, scattered retouch.

Literature: The Decorative Arts of the China Trade, by Carl L. Crossman, Antique Collector's Club, 1991, pp. 72-75, explains that George Chinnery, who lived in London and both studied and exhibited paintings there, was a very accomplished portraitist. In 1825 he went to Canton and Macao, where he remained, painting many prominent members of the Western colony until his death in 1852. Lam Qua was his Chinese apprentice who lived and worked near him and became the most prominent of the Chinese painters in the English manner. Lam Qua painted small portraits in the English manner presumably for those who could not afford to sit for Chinnery.
Estimate $1,000-1,500