Set of Three Federal Mahogany and Mahogany Veneer Side Chairs 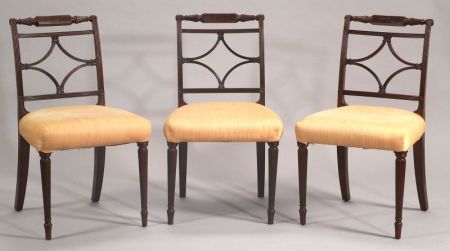 Set of Three Federal Mahogany and Mahogany Veneer Side Chairs, attributed to Thomas Seymour, possibly with John Seymour, Boston, 1808-12, the square backs with curved circles inlaid into the corners continue to the reeded stiles that flank the tracery like splats, which terminate with carved leaves above the over-upholstered seats on turned tapering reeded legs ending in turned feet the rear square legs rake backwards, old surface (some repairs), ht. 34 1/2, seat ht. 18 1/4 in.

Provenance: Family descent from Levi Lincoln, Jr. Levi Lincoln, Jr. (1782-1868), who was born in Worcester, Massachusetts, and had a distinguished political career with leadership positions at the local, state and national levels. His preparation began with his father, who had been both a Massachusetts governor and a U.S. Attorney General; his Harvard education; and a legal career. He represented Worcester in both the State Senate and State House of Representatives. He served as Lieutenant Governor and from 1825-34 as Governor of Massachusetts. Later, he was an associate justice of the Massachusetts Supreme Court. After serving in the national Congress, he returned to become the president of the Massachusetts Senate and, subsequently, when he returned to Worcester in 1848, was elected as the city's first mayor.
In 1848, Lincoln also hired architect-builder, Elias Carter, well-known for his fine and grand homes, to build him a mansion, pictured here with one of the Seymour chairs being sold. He undoubtedly brought the chairs to his new home from his earlier dwelling.
Estimate $15,000-25,000 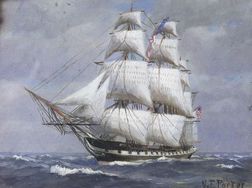 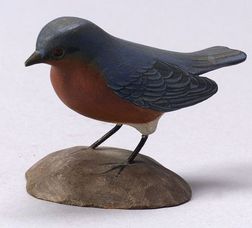 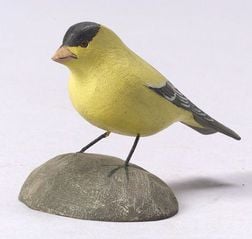 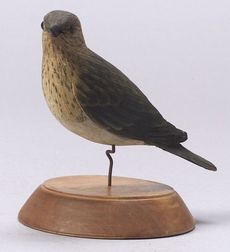 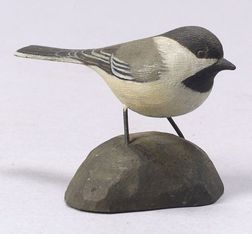 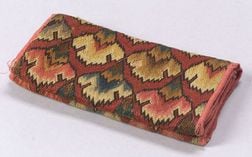 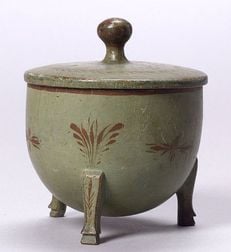