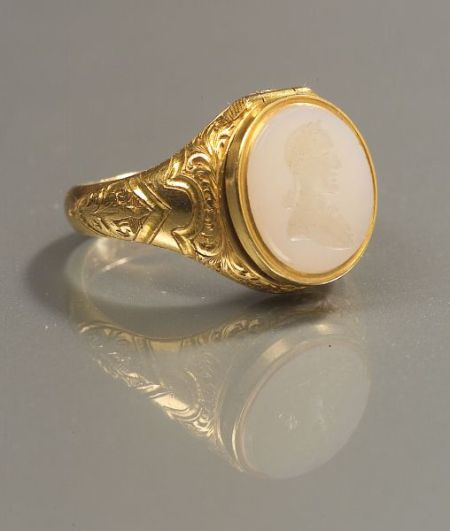 22kt Gold and Intaglio-carved Onyx George Washington Memorial Ring, Birmingham, England, 1858-59, the ring with an oval hinged bezel, set with a white onyx stone intaglio-carved with a bust-length profile portrait of George Washington with a laurel wreath encircling his head, which opens to reveal a fragment of George Washington's coffin, shaped in the form of a coffin and studded with thirteen small gold disks set under crystal, the ring exterior with engraved scrolled foliate designs, impressed hallmarks including "C.G," a crown, anchor, date mark, and "22."

Provenance: The history of this ring was discussed in a newspaper article in the New York Sun dated February 20, 1942, by William Currie, who inherited two of these memorial rings. In the article, Mr. Currie relates that a stone-cutter named John Struthers donated two marble tombs to re-interr the remains of George and Martha Washington after the originals were found to be in bad repair. Mr. Struthers was present at the time of the re-intombming and obtained a piece of the original wooden casket. A Philadelphia Gazette newspaper article at the time of re-interment reports a description of the event. A few days later Mr. Struthers sent a piece of this coffin fragment to a friend of his, Mr. Currie's grandfather William, in Scotland and a Washington admirer, accompanied by a letter in his handwriting, "John Struthers presents to Mr. Currie a piece of the coffin of George Washington. Philadelphia October 18, 1837." After a time the family preserved the memento and had three gold rings made, each containing a small piece of the Washington coffin wood. The younger Mr. Currie also stated in the article that a third ring was presented to Abraham Lincoln while he was President of the United States, which was revealed to him in a note in his uncle's handwriting. Accompanying this ring are the original documents mentioned, including the 1942 New York Sun newspaper article, the note from the stone-cutter John Struthers dated October 18, 1837, to his friend William Currie, the note penned by Mr. Currie's uncle, and the small Philadelphia Gazette article commenting on the re-interment.
Estimate $18,000-22,000 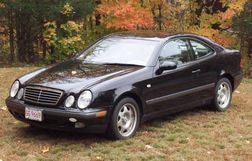 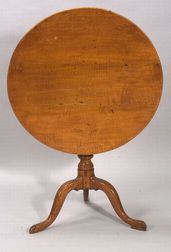 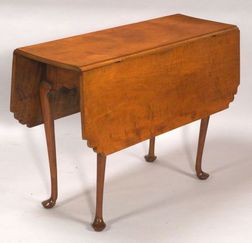 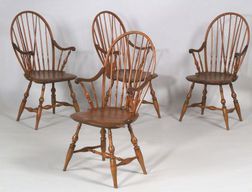 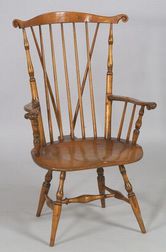 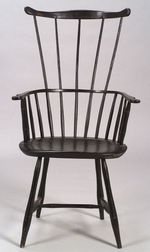 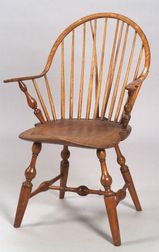