Provenance: Acquired by Thomas J. Herring (1825-1895),a Boston slater. In October of 1847, T.J. Herring was married on Nantucket to Winnifred Bunker Folger (1830-1868),a descendent of Peter Folger, the grandfather of Benjamin Franklin.
The work has descended through the family to the present owner.

Exhibitions: The Thirtieth Exhibition of Paintings and Statuary, Athenaeum Gallery, Boston, 1857. The work is noted in the exhibition catalogue, page 15, number 329, lent by T.J. Herring. A photocopy of this catalogue accompanies the lot.

N.B. Fitz Hugh Lane was one of the foremost American marine painters of the nineteenth century. He was born in 1804 in Gloucester, Massachusetts, and spent much of his youth sketching the Cape Ann shore. He apprenticed with William S. Pendleton, the Boston lithography firm, in the early 1830s, specializing in topographic views. In the 1840s Lane probably saw the works of Robert Salmon and Washington Allston in Boston, and it was at this time that he decided to concentrate on painting. The paintings of the late 1840s and early 1850s reflected Lane's earlier graphics training, in conjunction with the influence of the marine artists of the earlier generation. As is apparent in Manchester Harbor, the foreground details, with its figures, piers, and spits of land, set the scale for the work while accentuating the vastness of the view and its light. The low placement of the horizon line allows for an expansive sky. Tinted with the warm hues of sunrise and reflected in the calm waters, the light becomes the focus of the work, as is typical of Luminism.

The horizontal arrangement of the composition creates stillness in spite of the activity of the foreground. In conjunction with the concentration of light around a sun viewed through clouds just above the horizon, Manchester Harbor foreshadows the increasing calm and poetry of Lane's mature Luminist style as it would emerge in the late 1850s.

This work was painted from the low land or bottom of Norton's Point, looking out through the gap between Smith Point and West Manchester. The hill seen to the right side is Glass Head; to the left is Gale's Point. The crib in the foreground would have been an unloading area for fishing boats to bring in their catch of cod fish.

We wish to thank to John Wilmerding of Princeton University, Esther Proctor of the Manchester Historical Society, and Stephen Nonack of the Boston Athenaeum, for their assistance in cataloguing this piece. For more information regarding Lane, contact the Cape Ann Historical Association regarding The Year of Fitz Hugh Lane, their year-long celebration honoring the 200th birthday of the artist.
Estimate $650,000-850,000 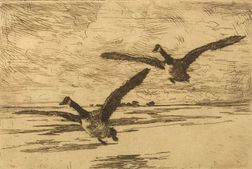 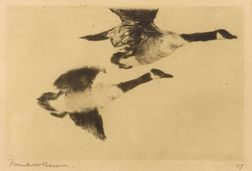 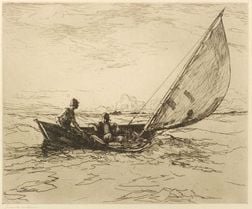 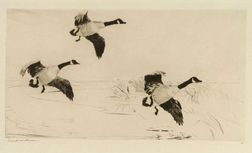 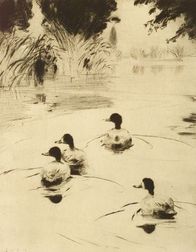 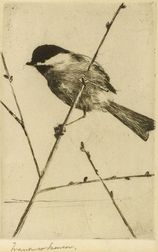 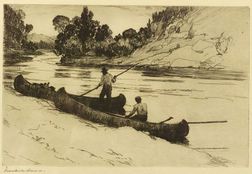