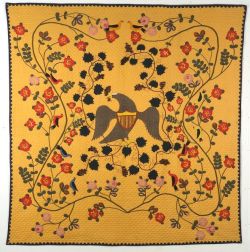 Note: According to oral family history, the quilt was made by Mary Bell, or Polly as she was known to her friends. in 1854 she married John Shawvan, then began farming in Dodge county. By 1860 they had six children and though John had substantial family obligations, he enlisted, at 34 years of age, into the Union army October 26, 1861 and was assigned to Company B of the 1st Wisconsin. He was later promoted to the rank of Sargeant and was a flag bearer in many battles. Mary assumed full responsibility for the farm, managing the household and caring for the children. During the time he was away she created this quilt for him to share when he returned home. But unfortunately his company was sent to Tennessee and into the bloody two-day battle at Chickamauga. He was wounded on the second day of fighting and died on Sept. 22, 1863 from wounds he received at the battle. Polly and the children were left to rely on a Civil War widow's pension. Included in the lot is a needlework sampler stitched by "Polly M. Bell" age 11," (Mary's nickname) with silk threads on a linen ground; also photocopies of a few signed affidavits regarding Mary and John Shawvan, probably helping to provide compensation to the widow and children, including: John Shawvan's Certificate of Service, a document signed by the Justice of the Peace verifying he married the couple July 14, 1844, a document signed by Sally Bell, the mother of Mary stating that the births and birthdates of the couple's children entered into the family bible are correct. Also included are some photocopied pages from the Military History of Wisconsin, regarding the Battle of Chickamauga. In it John Shawvan is listed as dying of wounds received in the battle.

Literature: This quilt and the family's story is illustrated in the book Wisconsin Quilts: Stories in the Stitches, by Ellen Cort, Howell Press, Charlottesville, Virginia, 2001, illustrated on the cover and on pp. 42 and 44.
Estimate $50,000-75,000 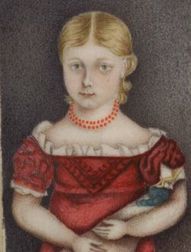 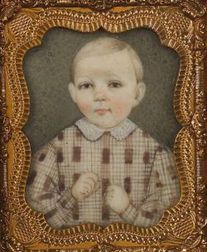 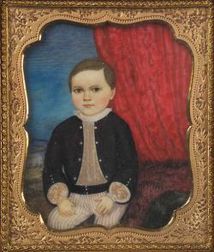 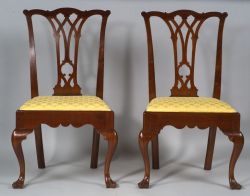 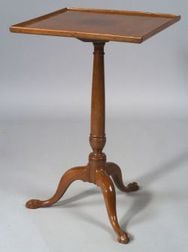 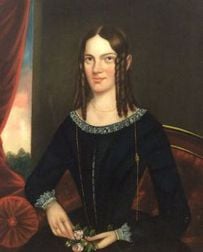