N.B. Silva began painting when he was apprenticed to a sign painter in his native New York. Despite receiving no formal art education, he launched his fine art career in 1865 and by 1868 was included in the National Academy of Design's annual exhibition. Although Fitz Hugh Lane and Martin Johnson Heade are often heralded as the leaders of the Luminist movement, Silva has come to be recognized as a strong contributor, particularly through his coastal views, such as the one presented here. He travelled extensively up and down the Northeast coast, painting views of Boston Harbor and Massachusetts' North Shore, Narragansett Bay, and the Hudson River. Through careful manipulation of light and color Silva rendered these landscapes most thoughtfully, not only accurately translating the terrain before him, but evoking the sentimentality of the natural American landscape. Perhaps the words of Silva himself best explain his approach to painting. Silva was recorded as stating "A picture must be more than a skillfully painted canvas; it must tell something...Some men can never paint from a memory or feeling - they give us only cold facts in the most mannered way...Many of our artists learn certain artist's tricks and then repeat them continually, with no idea of the deeper meaning of art, but only the outside of things, and very trivial things at that. All earnestness of purpose is lost, and with them art becomes a useless field of affectation where their tricks of color and handling are displayed."
Estimate $30,000-50,000 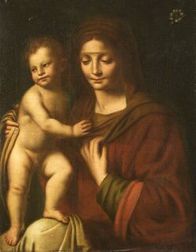 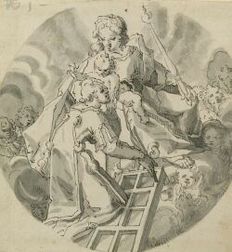 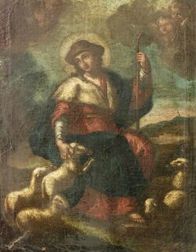 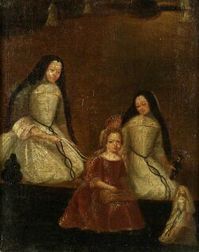 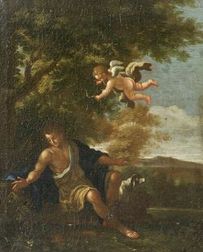 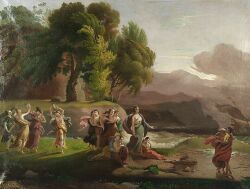 Continental School, 18th Century Style ...On the Island of Calypso 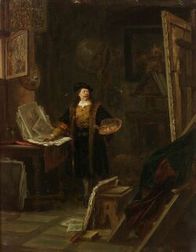