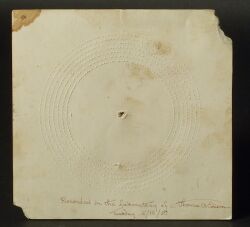 Rare Repeating Telegraph Disk Signed by Thomas A. Edison, 1880, the white card with spirally embossed dots and dashes, spindle hole in center and signed, dated, and inscribed in ink Recorded in the Laboratory of Thomas A. Edison Tuesday 5/13/80, 6 1/2 x 6 3/4 in., (partially mounted on card, two corner tears)

Provenance: Formerly in the collection of the late George Frow, England..
During the late 1860s and 1870s, most of Edison's work revolved around improvements to telegraph equipment or ancillary instruments. His first major invention was the Universal Stock Printer (itself an improvement on earlier gold and stock tickers), and this was followed by, among others, the automatic and multiplex telegraphs, the Electric Pen and the carbon telephone transmitter. Unlike most inventors, Edison and his team did not always work on one invention at a time, but often a few at the same time or went back and forth between ideas. However, it is fair to say that they learned from each project and often incorporated ideas from previous experiments and inventions into later ones. Such is the case with the Phonograph.
The idea did not just occur to Edison to wrap some tin foil around a revolving cylinder and shout some words into it and presto: Record the human voice. There are a couple of stories as to how Edison did get inspired to record sound, and each of them probably have some validity, considering the many thoughts swirling around in his head. One tale has him experimenting with a transmitter diaphragm to which a pin was attached and feeling the vibrations through the pin in his finger.
The other comes from the Embossing and Translating Telegraph. Commonly known as the Repeating Telegraph, this machine was designed as a way of making a permanent record of a Morse code message and then transmitting it at a later time. The machine consisted of two spinning plates on a common base. A paraffin covered card (called a disk) was placed on the first, over which was an embossing stylus (itself probably adapted from an Electric Pen) connected to a telegraph key. The stylus embossed the Morse code into the disk in a spiral of indentations. Over the other plate was a mechanical tracing point which was connected to a circuit. The "recorded" disk was put on this second plate, the indentations "read" and transmitted like a normal telegraph message. The story goes that when spun at a high speed the indentations running under the transmitting point made a humming noise similar to indistinct human speech. Hence, Edison was said to have contemplated recording sound.
Edison applied for his patent "Improvement in Automatic Telegraphs" (No. 213,554) on March 26 1877. The same year was spent on work with the Carbon Transmitter, a device which, when coupled with Bell's receiver, and substituted for Bell's inferior transmitter allowed the telephone to succeed.
All these inventions combined gave him the inspiration for the phonograph, which was experimented on and built in the last part of 1877. Indeed, although the tinfoil phonograph is normally thought of as a cylinder machine, Edison did plan for, and quite probably built, a tinfoil disk phonograph soonafter. However, problems with the motor made him abandon this idea. The patent for both cylinder and disk phonographs however did launch him into the Phonograph business, and he introduced his own Disc Phonograph nearly twenty-five years later. There are only two known Embossing Telegraphs, one is at the Edison National Historic Site in Orange, New Jersey, the other at the Menlo Park/Henry Ford Museum in Dearborn, Michigan. No disks are reported in private hands.
Edison is quoted by Francis Jehl as saying of the Embossing Telegraph, "That machine was the father of the phonograph."
Estimate $3,000-5,000 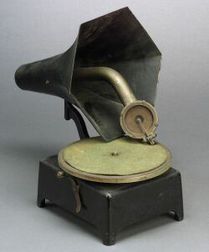 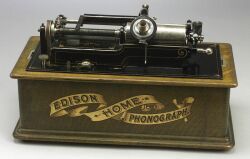 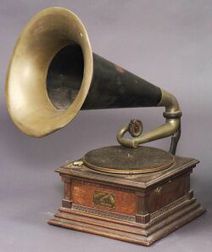 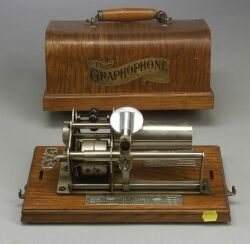 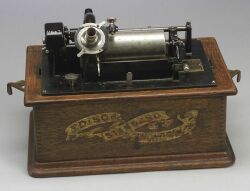 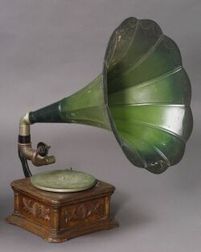 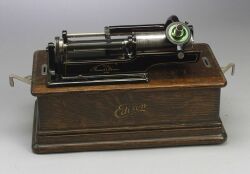