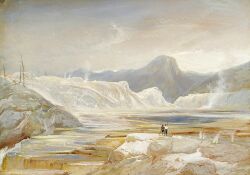 N.B. This lot will be included in the forthcoming catalogue raisonne of Thomas Moran's work by Stephen L. Good and Phyllis Braff. Thomas Moran was born in Bolton, England, in 1837 and immigrated to the United States with his family in 1844. The Moran family settled in Philadelphia, where Thomas became an apprentice to a printmaker. His employer noticed his incredible drawing talent and encouraged Moran to produce sketches for others to engrave. By 1856, Moran and his brother Edward had set up a private studio in Philadelphia so that they could concentrate exclusively on painting and drawing. Shortly following, Moran was hired as an illustrator for Scribner's, and by the end of the 1860s he was the chief illustrator for the magazine. It was this position that enabled him to secure a place on an expedition to document the western terrain of the United States. He traveled with geologist Ferdinand Hayden, who was assigned to officially map and measure the region. During his three week trip, Moran sketched almost continuously, recording much of what is now known as Yellowstone National Park. Among other sites, Moran was known to have sketched the Gardiner River, Liberty Cap, Tower Fall and Mammoth Hot Springs, which is possibly the location of the above work. After his trip he returned to his New York studio where he worked on a series of Yellowstone paintings, the most important of which was titled The Grand Canyon of Yellowstone. This piece was later purchased by the United States government to hang in Congress.
Estimate $40,000-60,000 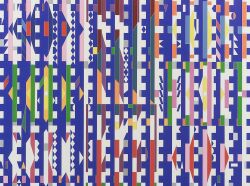 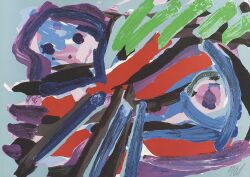 Karel Appel (Dutch/American, b. 1921) Walking With my Bird 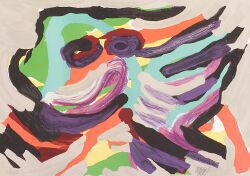 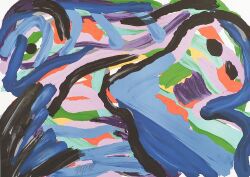 Karel Appel (Dutch/American, b. 1921) Floating in a Landscape 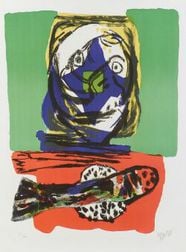 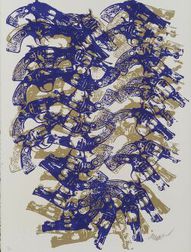