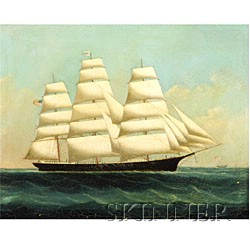 N.B. J.T. Foster launched the Pilgrim on December 2, 1873, for Henry Hastings and Co., Boston, whose house flag flies. The Pilgrim was the last vessel built in Medford, Massachusetts. The ship sailed many years as a well-known trader between Atlantic ports and those of Australia and the Far East, and proved a profitable vessel.
Estimate $12,000-15,000

The Pilgrim was built in Medford, Massachusetts.